For the third day in a row I have a smile on my face. This time it is for quite a selfish reason!

In a previous blog I mentioned how hard it is for volunteers to bring dogs in, knowing as we do how overcrowded the refuge is, so I was feeling very guilty about a little dog that I brought in myself. Okay he was small, but he was adding to the numbers and that is the last thing we need at the moment.

Nearly two weeks ago I spotted a small jack russell type dog wandering round looking lost at the refuge gates. Several other volunteers saw him too, but we were unable to catch him. Then as I left the refuge just over a week ago I saw him again. It was a couple of days after Team Sport had been at the SPA, and I was glad none of them were there to see me as I sprinted at the speed of a slug after the little dog. But success was my reward and Sam, as I named him (cos I first saw him on a samedi) arrived at the refuge.

It wasn’t until yesterday that photos of him were put on Facebook, but the result was immediate. “Sam’s” mum came to collect him today, having seen him on the SPA Facebook page. He is now identified and so if he does go walkabout again, we will be able to reunite him with his owner straightaway. With any luck he will have learned his lesson and that is the last we will see of him!

Good week so far; hope tomorrow won’t bring me down to earth with a bump.

Sam leaves after 8 days at the refuge. Found by his owner thanks to Facebook! 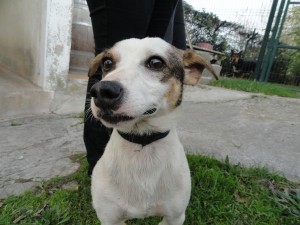 2013-10-30
Darcey Dyson
Previous: Two lovely girls are adopted!
Next: And the bubble bursts!