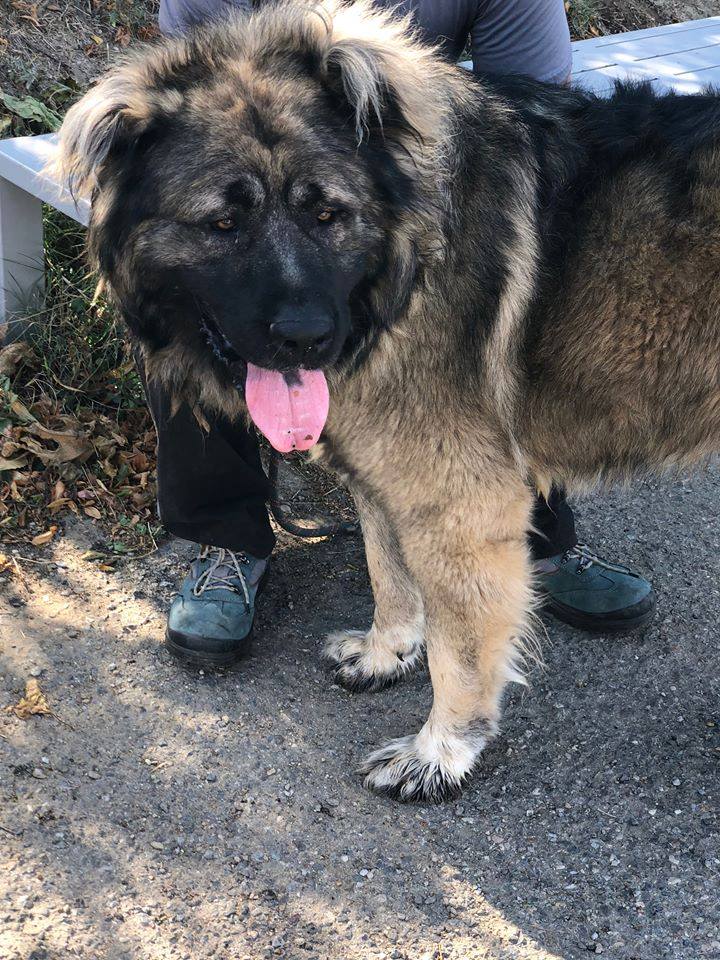 At the beginning of October 3 joggers arrived at the SPA with the biggest dog we have ever seen. A magnificent 75kg Berger de Caucase, who we called Leo.  Found as a stray we checked him over for a microchip. Our delight at finding one was short lived when we discovered that it was an unregistered Romanian chip!

So, what was the problem with that?

Well, France is a rabies free country and Romania is not so unless we could prove that Leo had been in France for a long time and he automatically had rabies free status or we could find his owner and papers then his future was at risk.  At best 6 months quarantine and at worst euthanasia, Leos life really was on the line!

First thing that was done was to check with all local vets to see if Leo was registered anywhere. He wasn’t.  So where had this dog come from and how had he got here?

We needed help, and fast!

Its also heart warning when you appeal for help and other rescuers drop everything to help. We set up a great group of English, French and Romanian speaking rescuers whose detective skills were second to none!

We went back to the details that we did have, an unregistered Romanian chip. We contacted the manufacturer of the chips and they were able to tell us what vet in Romania had bought that batch of chips.

One of the Romanian rescue girls called the vet who was able to tell us who brought the pups in to be chipped ( the breeder) but not why Leo was chipped and it wasn’t registered on the system. It came as a big shock to learn that dogs can be legally removed from the Romanian system at the owners request. The only thing to do was to speak to the breeder who now lives in Italy to try and get information from him.

This wasn’t easy, we did find him but him information was sketchy and unreliable. We spent a lot of time tracing and speaking to friends, contacts… all to no avail.

The DSV, the UK equivalent to DEFRA were getting very tetchy and time was running out.

We appealed again for information and received information from a very helpful lady who seemed to know the owner and kindly asked him to arrange for scans of Leos paperwork to be sent to us to save his dog life! From the passport scan we got a name, address and phone number of the person who bought him from the breeder.

Back to the Romanian girls. The number wasn’t active, so, they called the equivalent of the local Mairie, who knew the family of the owner on the passport. She called them, and the mum told us her son had bought Leo for a friend , he was in Africa but she would ask him to contact us asap and low and behold he did!

He had bought Leo and taken him to Corsica to his friend 3 years ago. This friend became Leos  owner. We also got his name and contacts and heard that he was living in the Carcassonne area. Wait a minute, 3 guys brought him in as they “found him whilst out jogging”….BINGO we had strong leads to the owner!

A few calls later and we had tracked the owner down who was able to arrange for us to get all of Leos papers and sign a contract of abandonment, had he done this in the first place it would have saved many, many hours of rescuers time and ensured his dog was not at risk from euthanasia….

But, all’s well that ends well and now Leo is no longer at risk and is available for adoption. We need to spend some time really getting to know Leo but we have had various offers from breed associations as well as some individuals so it wont be long before he has a home.

We have often had dogs brought in with foreign chips and we can usually track the owners, but Leo was the first from a non rabies free country. Rabies free status is not to be taken lightly even although the last reported dog with rabies in Romania was in 2016 and that the reality of Leo having rabies was minute. Our vet saw Leo regularly and he was always given a clean bill of health. We contacted a lot of associations who made attestations for our DSV that their dogs in similar situations were allowed quarantine as opposed to euthanasia. We did our homework! We even had an association who would have taken him for any quarantine period!

If you do have a dog living in France from outside the EU please register them in France and make sure your documents are kept safe and their rabies up to date. So, if they get lost, they are never at risk. We are lucky as we have the resources and language skills to trace chips, some refuges don’t, and your dog could be euthanised after 10 days.

There were so many rescuers who helped us that I won’t mention them all by name but would like to say how very grateful we are for your help and support. Thank you to everyone who contacted either them or us with ideas and information. Without you Leo could have been facing 6 months quarantine or worse…