Several hours and 400kg of dog and cat food later…..

Well, today was day two of the collection to benefit the SPA organised by the Children’s Council of Carcassonne. I spent several hours there, along with a number of volunteers and lots of very enthusiastic children. It was about as noisy as the refuge to be honest, but loads of fun. Here are some photos of the children, along with some of the 400 or so kg of croquettes that were collected during the two days.

The main aim, as well as collecting dog and cat food, was to make people aware of the problems faced by the refuge, especially as summer approaches and people tend to abandon their animals. Lots of journalists attended and asked questions of the children, all of whom were extremely well- informed about the issues. Oh, if only they will take this awareness with them into adulthood!

Back at the refuge there were a couple of fabulous reservations, however, in my usual cautious manner, I am saying nothing until the dogs leave. But if you want some amazing news, you may want to read the blog tomorrow (says she, fingers firmly crossed behind her back!)

Informing the next generation 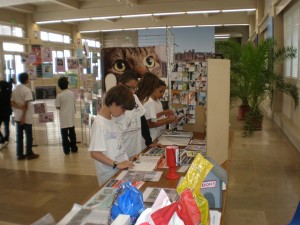 This is what 400kg of dog and cat food looks like! Thanks kids! 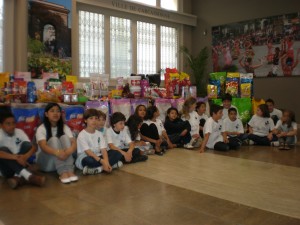 2013-06-19
Darcey Dyson
Previous: Galion sails off
Next: Three in and three out, plus a welcome return (of a non-canine variety!)