Shadow is a truly sweet soul who has obviously had a few trials in his life along the way ending up in a refuge again at the age of 7yrs . He was very quiet when he first arrived and we didn’t hear him bark for about a month . He was always just there , no real greeting or confirmation that he knew we existed . Christmas was a bit bewildering! Why were these people giving him squeeky toys , teddy and tennis balls ! What was he meant to do with them , he hadn’t a clue ! The wrapping paper was delicious !! Saucisson on the other hand !! He had stolen one whole saucisson & a baguette by christmas ! Now I have to point out that this was quite a feat , as he was unbelievably unfit & very very fat . His first walks consisted of going down the drive and back , then we progressed to walking to the first bend in the road , about 200m . Not only was he completely puffed on our return , but he was very stiff in his joints . We decided to give him a month of Corteflex , which did the job . He was less stiff and more able to continue with his fitness programme . He has managed to steal 2 more saucisson , but I blame us for turning our backs on him ! He knows the routine , people turn up for an apéro , out comes the saucisson , then we walk the people to their cars and voila , saucisson gone without a trace !! He has however done us proud by losing over 5k in 7months . He is truly obsessed with food , and once in his grasp you can just forget it !! Shadow is an absolute poppet with all other dogs , irrespective of age & size . He has also been a diamond with our neighbours children , a 6yr old and twin 3yr olds ! He likes to chase the chickens when he’s feeling sporty , but it’s only a game ! He now greets us like a puppy whenever we come home and occasionally has been know to give us a cuddle ! He barks at any cars that arrive and defends his home with pride – if I didn’t know him , I don’t think I’d not take him seriously !! As sweet as he is , he’s been an education for us . Before Shadow we owned 3 weimaraners , a Retreiver , 2 Border Terriers and a Griffon . But taking on a rescue dog is a whole new ball game . I think we have had to be more patient with him than any of the others because he’s not a puppy , he has had problems , but therefore the reward we get when things start to come good is immense ! We have no regrets and I am now sure Shadow knows that this is his Forever home , chickens and all ! The pictures are November & now – I hope you can see a difference !
Nikki & Dave Harland . June 2015 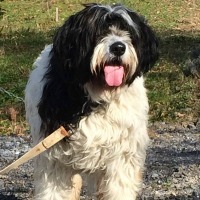 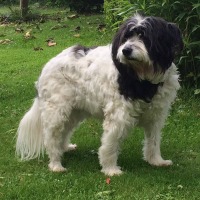