Home / Life After The Refuge / Six Months On – Caillou

Posted by: Darcey Dyson in Life After The Refuge November 16, 2017

Hi everyone, Darcey here! Today is six months to the day since I adopted Caillou so I thought I would write a bit about my experience for the section “Life After the Refuge”, as half a year seems to be a noteworthy landmark.

Very few dogs arrive at the SPA after spending their lives in loving homes, but some have had worse experiences than others. Caillou arrived at the SPA in July last year at the age of 7 months, having known nothing but mistreatment. Apparently he was tied up and beaten with a shovel, plus he also has what the vet thinks is a burn scar on his flank.. Hardly surprising that he should have issues.

Initially he could not be approached, and at his first visit to the vet he showed so much aggression (due to fear) that the vet was sure that Caillou’s fate was to be euthanised. She didn’t realise that this is not what the SPA is about.

Instead it was a slow and steady introduction to the world. I think I was the first person to take him for a walk outside the refuge, but the wonderful staff had already started socialising Caillou on the SPA grounds. I remember taking the lead out of Marion’s hands and offering to take him out.  Yes, I was a bit nervous, because thus far Caillou had always growled at me from the back of his kennel. But this first  walk with him went fine, and I started to fall under his charm.

Dog trainer Shirley came to the SPA a few days later, and I introduced her to Caillou. She reassured me that he was a normal dog, just a terrified one.

The next step was dog school, specifically the Club Canin Carcassonne, where I took Caillou once a week for 7 months. This meant taking him out for a precious hour of freedom then putting him back in his kennel. Off the lead he was playful and not at all aggressive with other dogs, albeit a bit over-enthusiastic. On the lead he was quick to learn commands, but was not as quick to learn as other dogs who of course lived with loving families.

After several weeks of this, Caillou was finally able to share his kennel at the SPA. Gradually he was given more and more privileges, such as being let to run free with other dogs in the mornings when the SPA was shut to visitors. This is great for socialisation and helps dogs to gain confidence.

Of course there were setbacks. Once at dog school I tied Caillou up while I went to help someone with their car. When I got back he was in a total panic, snapping and snarling at everyone, like a cornered beast. When he heard me call his name he calmed down instantly and jumped into my arms. But I realised then just how damaged he was, and that despite his progress, there was a lot of work still to do. I also realised how attached he was to me.

Lots of volunteers had started walking him , but in his box he remained a barking, seemingly aggressive dog. No one who didn’t know him would offer him a home. But I did know him, and I loved him. And he loved me. So after he had been at the SPA for ten months, on May 16th I adopted him.

So six months on, what have I learned, or rather had confirmed.
Firstly you get to where you want to go  far quicker with love than anger.
Also there is nothing in the world more rewarding than having your “difficult dog” praised for his behaviour.
Also the best place for a Sunday nap is lying on the sofa with a dog curled up alongside you, as if he had never ever known any cruelty or hardship his entire life.

As I say, it hasn’t always been easy. Probably just about every adopter in the world goes through a period of thinking “Oh my God, what have I done”. So there was a bit of that. Then at about the five month point there was a crisis. Things between Caillou and my husband were degenerating,  and he asked me why, with all the perfectly well-behaved and gentle dogs at the SPA, I chose to bring home a “psycho”. Oops, time to ask for help!

Thankfully  dog trainer Roger agreed to pay an emergency visit. I knew the answer to the problem, but of course it had to come from an outsider (and a male outsider) to be acceptable. Roger’s visit lasted an hour, but what he had to say was delivered in the first 5 minutes. A week later and with very little effort, the issue was resolved.

So a very important lesson is to never be too proud to ask for help.

Caillou can now be left tied up outside the village shop while I pop in for bread. We have only been doing this for a month or so; at first he barked but he soon realised that I am coming back. It is all about small steps and not overwhelming him with too much too soon. And in the evening we walk off lead with about 15 dogs and 10 owners, and Caillou plays with all the dogs happily and has just started letting the humans pat him.

So he is still a work in progress. However compared to the semi-wild but loveable dog of six months ago, he is unrecognisable. Having three other well-socialised dogs has doubtless helped him settle in, but all of them were rescues too.  And this is the source of much pride for me and my ever-tolerant husband, who didn’t even want one dog, but is now the devoted dad of four of them!

Not all SPA dogs have problems like this, I must add. In this section “Life after the Refuge”  you can find many tales of dogs who have adapted almost seamlessly to their post-refuge lives. And as I said, I knew what I was getting into. In many ways it has been far easier than expected. This is not only because there are lots of people to help and advise, but also because Caillou loves other dogs and people, and as soon as he knows they mean him no harm, he is absolutely adorable. Time, love and patience are really all that were needed.

There are other dogs who can be put into the “difficult” category at the SPA, being helped by staff and volunteers. Hopefully each and every one of them will find the home he or she deserves. If you have the time, love and dedication to take on a complicated dog, it can be extremely rewarding,  and I wouldn’t change Caillou for the world. 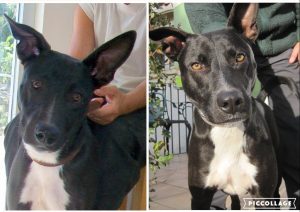 Caillou when he first arrrived at the SPA and today