Well, after I had published my blog yesterday we received some more good news.

Many of you will be aware that we have an excellent relationship with a Belgian refuge called Animal Trust (http://www.animaltrust.be/). In April with the help of Sarah, a volunteer at both refuges, five dogs who had little chance of being homed from  the SPA Carcassonne went off to try their luck at Eline’s wonderful sanctuary. I went to see them last month and you may remember that a few days later, Carbon was homed.

Well yesterday both Murphy and Pepere found homes! Although I adored Pepere and am delighted for him, the adoption of Murphy rates far higher on the good news scale. This dog had spent two years in the refuge in Narbonne. They have a much smaller capacity than us and when they found themselves overloaded a couple of years ago, we took Murphy along with several other dogs. We had no luck homing him either, but yesterday he charmed the socks off a couple and their female lab and two grown up children. Fabulous news and wonderful that after so long in refuges various, this lovely dog has finally found a home. For me it shows that there is the right home for every dog and that euthanasia for lack of space is the worst option.

Have said that, an article published yesterday makes it clear why some shelters have to resort to this. According to La Depeche, France leads the European  league in terms of euthanasia. Over 50,000 per year.  (http://www.ladepeche.fr/article/2009/05/27/612939-la-france-detient-le-record-de-l-euthanasie-animale.html) Refuges, including the SPA Carcassonne, are overflowing. Our SPA never resorts to threats in order to morally blackmail people to adopt a certain dog, because for us euthanasia due to lack of space can be avoided (providing dogs are neutered, of course!), but I can understand the desperation of other refuges, as more and more dogs and cats are abandoned. As summer continues things are just getting worse.

Lifelines such as that provided by Animal Trust are invaluable and I implore refuges and associations to work together to overcome the current crisis. A short term solution such as fostering  is often all that is needed. Once  a dog has been euthanized there is no going back. But my biggest plea goes to everyone who has an un-neutered animal. Please sterilise your dog or cat unless you are a registered and responsible breeder. That will make the biggest difference of all.

Pepere is adopted from Animal Trust. 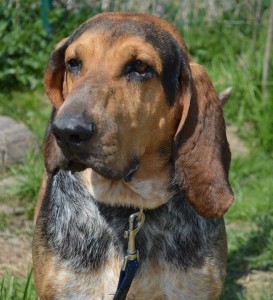 And Murphy leaves too, after three years of refuge life. 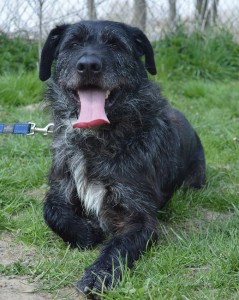 Thank you to Eline and her wonderful team.