Today was an amazing day for two of our dogs. Luther and Ziha have been at the refuge for almost exactly two years. They were brought to us when their owner ran into some legal difficulties (okay, he was sent to prison) and his dogs were to be destroyed, unless an alternative could be found. I won’t go into the reason for the owner’s incarceration, but it was not for violent crime and his dogs were beautifully socialised and certainly deserved to live.
At the time the refuge had space, so we agreed to look after Luther and Ziha. They have been waiting patiently ever since. We put them in one of the boxes opposite the parks so that, even though they couldn’t go for walks, they were able to play outside.
One of my fondest memories of them is of February 2012, when Mika, one of the refuge employees and I spent about 2 hours shovelling a huge pile of snow from outside Luther and Ziha’s kennel. The two dogs sat and watched us without moving the whole time! When we finished, we took a bow (well, I curtsied in my lady-like manner) and the dogs went back inside now that the show was over! It really made me laugh.
I am so pleased for them and so happy that their owner kept his word and came back to collect them.
I must add that this case was very much an exception. The Procurer has since informed us that we are not responsible for dogs in this position. However even at the time we could have refused; two years is a long time for dogs to be locked up. For people too, I suppose, except the dogs were innocent!  But in any case it has all worked out and Luther and Ziha can now enjoy the freedom they have been missing all this time.

And further to my post concerning the dogs at Animal Trust in Belgium whom I visited earlier this week, I can announce the wonderful news that Carbon, the black labrador, has been homed and has gone to live in Holland. I like to think that my pep talk in his ear on Tuesday helped, but actually I think it was thanks to the lovely Amber, who posted the news onto our Facebook page. 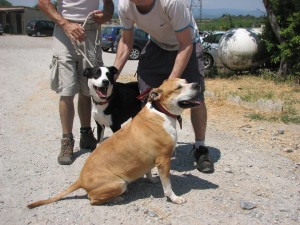 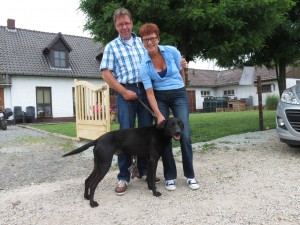 2013-07-12
Darcey Dyson
Previous: Two happy reunions in amongst the madness.
Next: Beauceron Day!