In light of today’s news, the arrival of three more pups, I thought that we would deal with the benefits of sterilising your dogs!

The biggest benefit of course is that the animals can no longer breed and multiply, thereby the stray animal population will eventually decrease. This means that the SPA would no longer be saturated and our adolescent and more matured dogs would have a greater chance of being adopted!

Sterilising animals eliminates the desire to find a mate. This means fewer animals running off or wandering into traffic; chasing or biting people or their pets. Loose dogs also toilet whenever and wherever they like and as well as looking unsightly this spreads disease. A cleaner, happier and healthier environment for us all!

The health benefits for both the male and females are numerous. As far as disease is concerned, it certainly reduces the risks of mammary tumors and ovarian cancer in females and f you neuter a female dog prior to puberty, she has an almost zero risk of developing breast cancer.

Male dogs, too, may benefit, with the risk of testicular cancer eliminated – and rates of prostatic cancer reduced. From a behavioral standpoint, sterilization is widely believed to reduce aggression toward other dogs, territorialism, and roaming, which can in turn protect dogs from the risk of injury associated with those behaviors, such as fights and getting hit by cars. Neutered males, particularly males who were neutered before puberty, are less likely to exhibit inappropriate urine-marking as well.

So why don’t people sterilise their pets?

Some say it’s the cost but here are some of the  myths about sterilisation:

So no more excuses, no more letting someone else take responsibility, all the refuges are full and we cannot cope, so please, please sterilise you dogs! 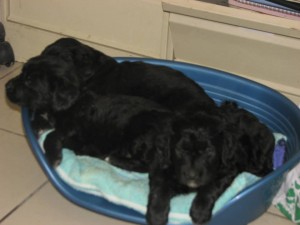