Just like at the Winter Games, today was Super Saturday at the SPA!

First off, the adoption of Izzie. She was brought in for rehoming last week as her owner no longer had time to look after her. Inevitably this seven year old labrador looked quite bewildered by her change in fortune. It must be strange for a dog to arrive in a busy (and COLD) refuge after being in a home for that long.

Luckily Izzie got quite a lot of attention on Facebook, and several people mentioned how much she looked like a dog from their past. One such person was Jackie, who drove for 5 hours to be able to introduce Izzie to her 12 year old doberman today. The SPA is closed in the mornings, but when someone has made this amount of effort to meet a dog, popping in during the morning is the least we can do!

Izzie was introduced to Tess on a walk, and then they were let off together in a park. All went well, needless to say, and Izzie was more than happy to jump into the car for the long journey home. A wonderful life awaits, and of course we will post photos of Izzie in her new home. 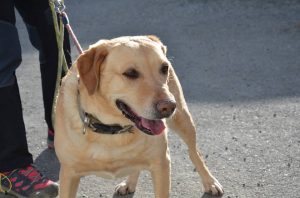 We had more wonderful news this afternoon…the adoption of Brenda! Her new family had been talking about getting a dog for some time, and decided on the spur of the moment to come along today. Sometimes timing is everything.

It was love at first sight when they spotted Brenda. A walk made them even more confident in their choice, and they were further reassured by the notes left at the SPA by Debbie and Andrew, who had looked after Brenda while she was recovering from her sterilisation. It is logical that the more we know about a dog, the easier it is to find him or her a new home. Brenda has a great CV, and now she will have the life she deserves. 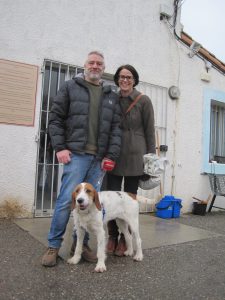 We also said goodbye to three puppies. Earlier this week we were worried that Samy would be alone this weekend, as he was the only pup from his litter (of five) not to have been reserved. As it turned out, however, the people who had reserved two of his siblings were no-shows. So there are now two pups left, one male and one female. But at least they are not alone, and we hope they will find new homes next week. 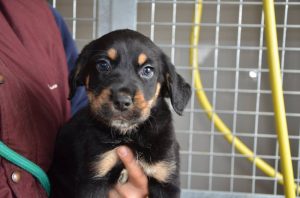 Samy – ADOPTED (as were two of his siblings)

So a good end to the week after all.

2018-02-17
Darcey Dyson
Previous: Adoptions of Coco and Jango
Next: Life of Brian