Home / Latest News / The even sadder return of Blanca

The even sadder return of Blanca

I can hardly believe that I am writing this, as I feel that I am in some kind of alternative universe. Blanca was returned to the refuge today. Yes, the couple who adopted her on Saturday (the Saturday that was 3 days ago) have given up on her already.  Blanca is deaf, you may recall. But she is a jack Russell and is too lively for them, and she “needs help that we are not able to give her”.  Moira had spoken to them last night to explain how to deal with some of the issues (squeaky toys are not always a good idea, for example), but they left home at 04H45 this morning, so it was clear that by the time they asked for help, their minds were already made up.

I was unable to speak to them, as I didn’t trust myself not to be angry. Moira dealt with them, and was her usual polite calm self. A great friend of the refuge, Jane, happened to be there, and I overheard her saying a polite version of what I wanted to say. I don’t think they will listen, though, because they know EVERYTHING and it is the dog’s fault, quite clearly.

When I was told by Doglinks that these people were driving from Rheims to collect Blanca, I thought it was a good sign. I thought that anyone prepared to travel that distance would be willing to do whatever it takes to make an adoption work. But perhaps all it meant was that they have too much free time and too much money. I don’t have enough of either, but my dogs are happy and I will do anything to keep them that way. I know Doglinks will be as upset about this as we are, but I have given up trusting my own judgement. Dogs are far more trustworthy than people, in my opinion.

Nothing good happened, except I did get my walk with Dusty. It looks like he hasn’t been walked since being adopted, as he pulled like crazy, but thanks to a magic harness (the Premier Easy Walk, in case anyone is interested), he just trotted alongside me. He didn’t even look too upset to be back at the SPA, to be honest. Not all adoptions are good adoptions. I learned that lesson twice more today.

Oh, by the way, I gave some wrong information in yesterday’s blog. Yemen is the boxer cross’s real name and he is actually micro-chipped. But no one rushed in to reclaim him today. 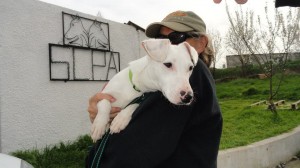