Today was a public holiday and the refuge was shut so the dogs had a nice relaxing afternoon. Its getting hot so we thought that we would remind everyone about dogs in hot cars!

Every year in every hot country dogs die unnecessary, slow and painful deaths from being left in cars. Before we hear of any this year let’s get the message out there that it’s totally unacceptable to leave your dog in a hot car!

It can happen so quickly and it’s an easy mistake to make. If you think that you’re only going to be a few minutes, you may feel that it’s safe to leave your dog in a car, even on a warm day. The problem is that it’s far more dangerous to do this than most people realise. A car can heat up astonishingly rapidly, with some vehicles reaching 40°C in just twenty minutes. Dogs cannot sweat: they can only lose heat by panting, and if the ambient temperature around them is high, this means that they cannot lose any heat at all. They’ll pant furiously, but will just get hotter and hotter until they collapse. It’s a dreadful way for an animal to die, and that’s one of the reasons why there’s such an outcry whenever an incident like this is reported in the news.

On a sunny day, leaving a dog in a car is as dangerous as putting the animal into an oven and turning it onto “roast”. It’s not enough to leave a window open, or to leave some water inside for the dog. It just gets too hot inside the confined space of a car. ‘Don’t Cook your Dogs’ campaign by Dogs Today magazine aims to highlight the issue as widely as possible, to prevent more unfortunate dogs from dying. Ignorance of the risk is a common excuse, and the campaign aims to ensure that nobody in any country remains ignorant about it.

So what should you do if you see a dog locked in a hot car? This is what I would do but it’s only my opinion. If the car was outside a store I would ask for an announcement to be made asking the car owner to return to the car, if the owner doesn’t appear I would call the police, but if the dog was really distressed I would take a photo or video with my phone, and break a window to get the dog out. Now common sense prevails here, but its better having to replace a window than having a dead dog!

So let’s try to avoid any preventable doggy deaths this year. Please do not risk leaving your dog in the car at all, leave them at home in the cool! 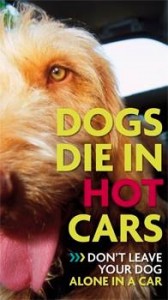 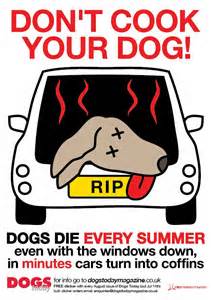 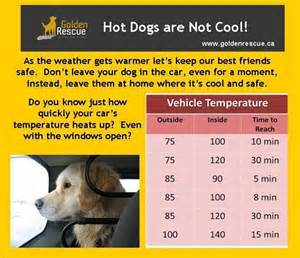 2014-05-29
Moira
Previous: A word on our oldies and identification in action, again
Next: That Friday factor yet again