Home / Life After The Refuge / The Journey by Zelda

The Journey by Zelda 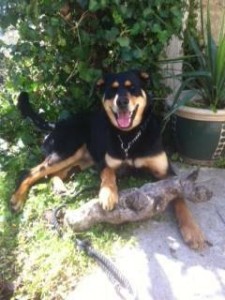 “Let’s go back to February 28th 2015….a story from Zelda”
Two dogs that thought they had a home for life were abandoned at the SPA today. First was two-year old Zelda, who was adopted from us (as Zizouille) about a year ago. She is on the “no longer wanted” pile. BUT My new Mum, Jane found this picture of me, and you can see that now I have a different life altogether!! She had decided to volunteer at the SPA Carcassonne, and ventured into the “concrete jungle” initially December 2014. To return shortly after in March on a permanent basis…there was strict instruction from John to find a new member to the family but not a small dog! Well, an open brief and where to start, there was so many to choose from all barking for attention and affection but she kept returning to my home which I shared with a great dog Tazer. Initially I was very frightened and wouldn’t approach anybody, but with some support from Tazer and a treat…we became friends and went out for a walk together. Jane returned on several occasions as a new volunteer and although there were several new dogs, always sat with me and I enjoyed the cuddles that she gave me behind the bars…little did I realise that she had decided…I was going home. Jane shortened her last return to the UK and I was adopted on April 11th…ten days after my 2nd birthday….approximately 6 weeks at the SPA is unusual. We both started our journey together walking the vineyards near Brezilhac, and I soon found new friends as you can see from the pictures…socialisation is hard for me, and I am afraid of people, children, flags, loud noises and shoppings bags to name but a few, but in eight weeks we have made great improvements. I am very lucky as we have a small open garden where I can play with my various toys, and I am particularly good at football…OK I’ve destroyed a few and have thrown a few tennis balls down steep banks which both my new Dad and I have managed to retrieve…we have been to Mirepoix/Limoux markets as my Mum loves to source local fruit/veg and I generally always get a treat when she stops for coffee. Many people have approached me on these days out and I have even had photographs taken….today has been an adventure Toulouse airport….who know’s where we will be going next, such an adventure!!
“A day in the life of a volunteer” Every Tuesday and Thursday afternoon I set off for the afternoon to the SPA Carcassonne….with so many dogs to walk I have to choose those that have not been walked recently…I was surprised it could be up to a week! I personally have a soft spot for the big dogs in their single boxes, and have built up my muscles in my right arm!! (thanks to Gus…lovely chap).They are all so very different when they are given the opportunity to get out… for anyone considering “adopting” please do not pass by those that look over excited, or retire to the back of their homes..just give them a second look. There are two tips I would give any new volunteer make sure you bring water as some days it has been over 30 degrees, and even though we don’t walk on those days…Cindy, Moira and myself washed three puppies for the first time it is thirsty work. Secondly, pair up with a friend, and enjoy the walks together this allows those dogs that are homed in pairs to go for a walk together, and it is great to see the difference. When you have the time get the brush out…with the warmer weather some of the dogs are losing their winter coats and is great to see how they appreciate the cuddles and warmth that you can provide…it always gives me great satisfaction to see the “older dogs” adopted and see them off with their new owners. Anyway back tomorrow with my daughter to show her the ropes and despite the weather, a walk and a smile costs nothing.
2015-06-16
Jane Hartley
Previous: Zya is adopted!
Next: Dingo delivered…