Home / Latest News / The sad return of Duck and I mess up! But good news for cats!

The sad return of Duck and I mess up! But good news for cats!

I have to make a correction to yesterday’s blog; Eloi did not actually leave, he was just reserved yesterday. I jumped the gun a bit, but at least we know he will be leaving soon, and in the meantime we will find him a new kennel-mate so he does not miss his sister too much. Sorry about that, everyone.

One reason I was a bit distracted was because I had just heard some news from official blog translator, Hélène. She has been running a one-woman campaign for several months to try and put political pressure on her local mayor to pay for the sterilisation of the village’s wild cats. Yesterday all her work was rewarded, with a not inconsiderable sum of money being put aside to help with the overpopulation problem. Collecting signatures is a tiring and time-consuming business, so it is just great that it bore fruit. Many congratulations to Hélène and her mum, who I know helped a great deal too. Gathering nigh on 600 signatures is no mean feat! I am sure Hélène would be happy to give advice to anyone who wants to follow suit if your village has a similar problem (and let’s face it, very few villages don’t).

Okay, back to the SPA. Today was sad sad sad. Duck came back, through no fault of his own. The family’s other dog kept attacking him, and Duck is so small that he was unable (and ill-equipped) to defend himself. Being in a kennel again must be a shock for him, especially after a night in the warm.

All in all, yesterday’s blog, with its inaccuracy about Eloi and now with the return of Duck, was just a waste of time.

Thanks to all the walkers today; even if no dogs were adopted, at least some of them got a little taste of freedom.

Duck is behind bars again 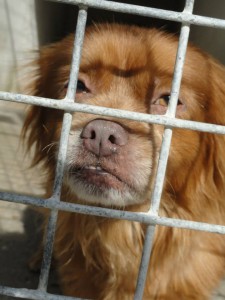