The sad return of Dusty

First news of the day is that the five dogs arrived safely in the UK. As Moira said in her message to me, it was very impressive, how, despite the fact that they arrived several hours ahead of schedule and well before the place opened, night security staff were there to welcome the dogs and make them comfortable, even though we had no way of warning them of the change of arrival time. Those five dogs are in good hands, believe me!

Back at the SPA, today saw the sad return of Dusty. Like Tayson, that is the fourth time he has been returned to the refuge and each time it is for the same reason. Listen, people, when we tell you that a dog is a runner and needs an enclosed garden, we mean it. Poor Dusty, back again, and probably wondering if he will ever find someone who loves him enough to keep him; someone who already has an enclosed garden or someone who is willing to raise the height of their fence to accommodate this lovely boy. I will go and see him tomorrow, and assuming his vaccinations have been kept up to date, will take him for a walk and try to reassure him that YES, we will find him the right home, one day. He was born in November 2010 and so there is still plenty of time for him. I hope.

A beautiful boxer cross arrived too. We have called him Yemen, although of course we do not know his real name because, surprise surprise, he is not identified.

Better news for Gem, whose owners had already contacted us to say that her IDENTIFIED dog was missing before he even arrived. Responsible ownership! Owner and dog were quickly reunited. I hope the same can be said for the other missing dog whose owner signalled our Facebook page. She is not identified. I hope she is found, but I hope that her owner learns a lesson and pays what is a relatively small amount for a microchip. What is wrong with people that they would rather put themselves through hours of worry and heartache, rather than just get their dogs identified? I know identification does not guarantee that your dog will be found, but it certainly increases the chances.

Although this blog tries to put politics aside, we are definitely in favour of anything that can make animals’ lives better. So please, if you haven’t already done so, could you sign this petition and spread it far and wide. At present  in France legally you can be either a person or a thing, meaning there is no difference in law between the rights of a piece of furniture and those of an animal. This needs to change, and the Foundation 30 Millions d’Amis  is spearheading a campaign to introduce a third category, for living creatures other than humans. You can sign regardless of where you live. Please do so. Together we can make a difference! 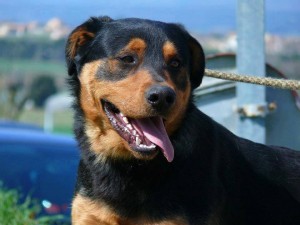 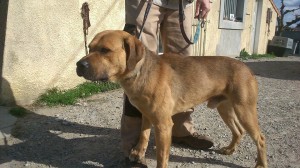 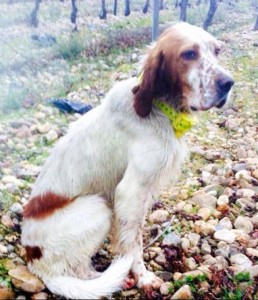 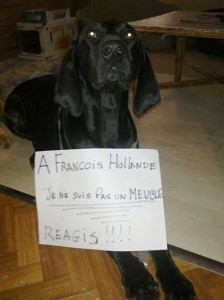 2014-02-24
Darcey Dyson
Previous: Five (more) dogs leave for a “Pawsitive” Future
Next: The even sadder return of Blanca