Home / Latest News / The tale of Capsule and Isis.

The tale of Capsule and Isis.

In Sunday’s blog I mentioned that a friend who was staying with me found a couple of dogs tied up and apparently abandoned. I know that many of you have had this experience, so I thought it would be a good idea to tell you a bit about it.

Whilst walking into town, Debs saw two frantic dogs tied to a railing along a well-frequented cycle path outside a café. She phoned me to ask what to do. On the basis that the dogs might have been left while the owner had a coffee (unlikely but possible), I told her to leave them for a while and see if they were still there on her return. So she untangled their leads and went on her way.

When the dogs were still there 2 hours later, it was clear that something was wrong. The usual thing to do here is either to inform the police municipal, or to take the dogs to a vet to see if they are identified. At this point a vet will either contact the dogs’ owner or failing that, will inform the local pound (fourrière) to come and collect the dogs.

The vet was shut and I did not want the dogs to be left any longer than necessary for the police municipal to arrive, so I contacted the refuge directly and brought the dogs in. 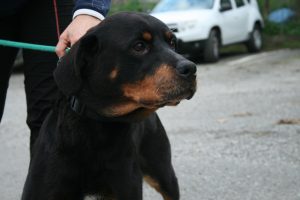 It turns out that both dogs are identified by microchip, and Debs and I went home, hoping that the dogs’s owner would be contactable and would collect his dogs. Of course at this point the refuge staff would have mentioned the inadvisability of leaving dogs tied up etc.

However attempts to contact the owners failed. The dogs have the same owner, but are registered to two different addresses, both in departments far from Carcassonne. There are four mobile phone numbers on the central database; Two numbers are no longer in use, and the other two are hung up as soon as the ScPA says who is calling. The only conclusion to be drawn is that the dogs have been deliberately abandoned, and so both are looking for new homes.

Of the two, Capsule will find it harder to find a new family. Not only is she 10 years old, but she is a rottweiler, a breed that requires special permits and insurance in France. Isis is black, which is not good in terms of adoptions,, but she is younger, at three years old. However now they are at the refuge both will be well  looked after, get regular walks and vet treatment, and sooner or later both will find new homes. Unfortunately t is very unlikely that they will be rehomed together, and as they are inseparable at the moment, this is perhaps the saddest aspect of the story.

We hope that this blog has given you some insight as to the process that follows finding a dog. There is a very good article here, and we know that circumstances vary enormously, so we at DRC are always available to give advice.

In the meantime, let’s all wish Isis and Capsule the very best of luck and we will keep you informed as to their progress.