First the good news!  Since the summer we have been working hard and I’m really pleased with Poppy’s progress when out walking, recall is now coming along well and when with me on her own she does not stray far. She still follows Jake, I guess she always will, but she now comes back first and voluntarily. I never forget to great her with open arms, lavish praise and a tasty morsel. Positive training and constant reinforcement.

I am however really reaping the whirlwind with Miss Poppy! Don’t get me wrong, she is a lovely dog but, and as I’ve been so lucky with my other 2, it’s as if she has been sent especially teach me a lesson! On the behavioural side of training much of my advice to others is based on knowledge gained but not necessarily on personal experience.  Now I’m being given a chance to put the theory into practice. Thank you for that Poppykins!

Right from the start she has been a food thief and with such long legs could easily reach the the counter top. The crunch came quite early on when she knocked over a bowl of very hot stock. Fortunately it was just messy and she didn’t get hurt, it could have been far worse! On the plus side it scared her so much that she didn’t go near the counter top again. Also I am more careful and I don’t leave anything tasty within reach. Removing the reward removes the unwanted behaviour.

If you have a dog that steals from the table or work surface one thing you can try is set a trap. Find a tasty morsel, a piece of string, a tin can or two/a bunch of keys (anything that will make a loud noise when it hits the floor but is light enough not to hurt the dog). You see where this is going? That’s right, tasty treat near edge of worktop/table, tied to something that’s going to make a clatter when the dog grabs the treat. The fright may be enough to deter the behaviour but it is then up to you to reinforce that by not leaving anything in temptations way and also to train them not to take without permission.

Here’s how.  First offer food in a closed fist and only when the dog stops sniffing and looks at you do you give the treat with a command to take. Once this is learned do the same thing with an open hand if the dog tries to take the treat simply close your hand, when it looks at you for guidance give the treat ‘take’. Then move on to placing a treat on the floor in front of your dog (not too close  to start with) and stop them from taking it. At this point you can now introduce the ‘leave’ command. When your dog is calm and looks at you give permission to take the treat.

Poppy, deterred from taking from the worktop then learned how to open the dog food draw. No mean feat and to this day I do not know how she did it, but child proof locks have solved that problem! 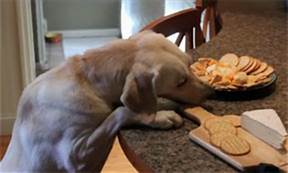 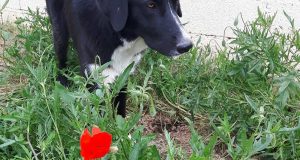 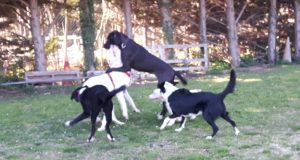 Coping with a teenage dog