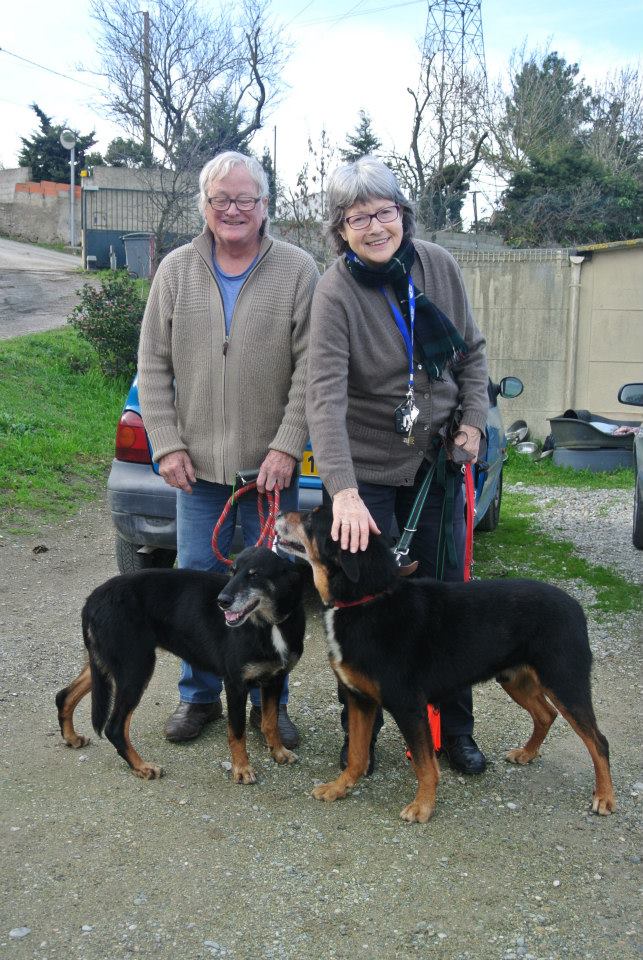 Well, for those of you who are not on Facebook or read this blog on my site first, the wait for the big announcement is finally over. Today, saw the adoption of Ugo and Uta. Yes, you did read that right. After almost two and a half years at the SPA, this brother and sister finally found a new home.

Their story is shocking, but also typical in many ways. They were brought into the refuge in August 2011 by their owners, who had adopted the two dogs from the SPA as puppies and were now moving to an apartment. However, these two dogs had spent their whole lives together and had not been socialised with other dogs. Nor are they good with cats. A future blog will deal with the issue of socialisation, but all I will say for now is that abandoning any dog due to a house move is just inexplicable to me. Abandoning a dog that is not socialised is worse, as obviously it is more difficult to find him a new home. And to abandon TWO such dogs makes our task of finding a new owner almost impossible. Hence why these two magnificent dogs have spent so long behind bars.

I would like to think that their former owners feel at least some shame, but I suspect they haven’t given their dogs a moment’s thought since abandoning them, probably in the same way they have forgotten  the excess furniture that they disposed of at the same time.

An event was created on Facebook in an attempt to find Ugo and Uta a home and this was shared with literally thousands of people. Funnily enough it was not thanks to this that they have been rehomed, rather it was by direct contact with the refuge. A couple of weeks ago a woman came to ask about dogs  in need, and this was followed by numerous emails. Yes, here was someone who genuinely wanted to save a life (or two). Once the preliminaries had been done, there was just one final question that should have been asked sooner; did the lady have any cats. We all held our breath as we waited for the answer. PHEW! And BINGO!

This was the point at which we informed the other volunteers. It was only fair to give everyone a chance to say goodbye. Ugo and Uta’s arrival at the SPA predates that of most of our volunteers, after all! Tears were shed, and Sylvanie and Martine decided to come and wash the dogs so that they would be at their best for their new mum who came to collect them today.

Thank you to everyone who looked after these two dogs while they have been at the SPA, employees and volunteers alike. Their story is sad and shows certain humans in a very poor light. But it also shows that we must never give up. I think we were all convinced that these dogs would die behind bars.

The biggest thanks go to their new mum.  We wish there were more people like you in this world. We will pass on news and photos, of course! Goodbye Ugo and Uta, please come and visit us!

I will mention other refuge news tomorrow. This is a stand alone story!

Ugo and Uta with their new Mum, Diana, and her friend Terry. 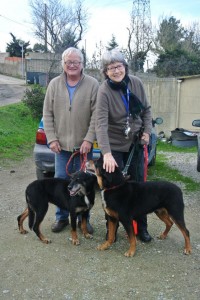 3 thoughts on “The wait is finally over!”