Home / Latest News / Three adoptions and a lovely day in the sun!

Three adoptions and a lovely day in the sun!

Today we had three adoptions!

First to leave (officially) was Pebble, who is now known as Desdemona. Why? Because she is now living with Othello (also ex of the SPA), with our good friend Edith. Desi has been there for a couple of weeks, but today the paperwork was signed, so everything is official.

Second to leave was Rizzla, who has hated every minute of his stay at the refuge. Luckily for him this was as short as possible, just the legal pound delay. When I met him for the first time earlier this week he just hid in his kennel. Luckily we had a photo of him (taken by the Mairie of Azille, where he was found), showing just how loving and friendly he was. Perhaps it was this photo that caught his new family’s eye; in any case they came along to meet him and it was love! Rizzla left today to live in a large enclosed garden.

The third adoption was that of Beauty, the little sheltie cross who had arrived relatively recently arrived but whose shyness prevented her from being snapped up sooner, I am sure.

Romeo, the old yellow lab who arrived yesterday found his owners too, so there is no hot concrete kennel for him!

I popped up to see the volunteers who were manning (or as usual, womanning) the SPA stall at an event in Caunes Minervois. Thanks to Jane and Rebecca for representing us, and to Cai and Gill for hosting us again. It was also great to see Ron and his wife Brenda. Ron is kind enough to publish a weekly blog for us on Anglo Info, which this week is dedicated to Rex, who is desperate for a new home.

If you love beautiful gardens and fancy a day out in the sun, why not pop along tomorrow. As well as the SPA stand (selling books and some fabulous silk scarves), there are plants and English groceries, as well as many other lovely discoveries to be made in this fabulous garden setting. Dogs are welcome! And why not pop along to the SPA afterwards to say hi to us, on our regular Sunday opening.

Desdemona enjoying an ear scratch with her pal Othello 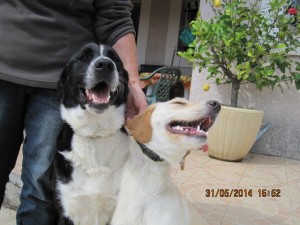 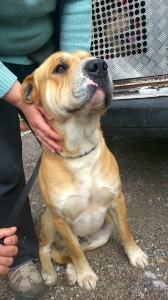 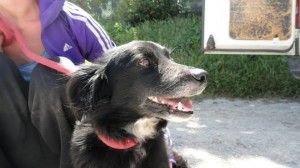 Jane and Rebecca with their respective ex SPA dogs, Benson and Gretta. 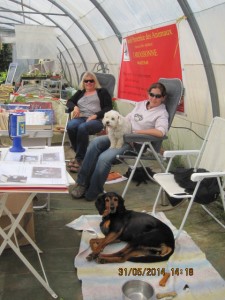 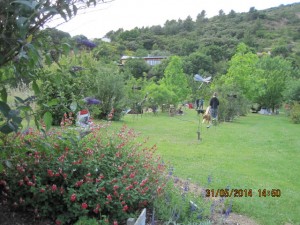