At 16H00 yesterday afternoon, Bruno de Jura Bezingha was playing in the park at the ScPA. This morning she is in her new home in the Netherlands. And inbetween she has been for a walk with a toddler, slept on a bed, and eaten what was probably her first DentaStix! Let me tell you all!

Georgie and her family fell in love with Bezingha when they saw her photo on line. They adopted fauve de Bretagne Chanel last year, and are always on the lookout for fabulous dogs. Making the trek to Carcassonne again was tricky in terms of timing, and they didn’t really want to rely on road transportation. I was discussing this with Moira, who suddenly had a lightbulb moment: Her husband was going to be doing some work in the Netherlands and was due to fly there from Toulouse this morning.

So long story short; husbands were cajoled, research was done, airlines were contacted, cages were borrowed (thanks Laura), cages were cleaned (thanks Moira), and then yesterday it happened. Bezingha spent the night with Moira and her family, and this morning it was off to the airport to be met by a very excited Georgie some 90 minutes later. And that was it; a new life has started for this lovely dog, who only made it to the ScPA thanks to one of our cruelty inspectors. To be fair it was more neglect than cruelty; Bezingha does not hunt, so spent her days tied up.

We look forward to photos of Bezingha as she settles in with Chanel and her other new pal, John Wayne Junior (an adorable teckel). I might even be planning to visit them myself…. 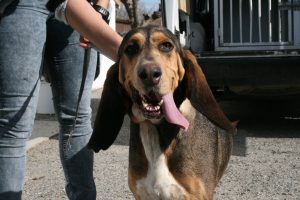 But wait! There is more good news.

One of the latest litter of pups (the “Ebony Litter”) has been reserved; a little boy who was chosen yesterday. There are 8 pups in this litter and they have had their second vaccinations and are all ready to leave! 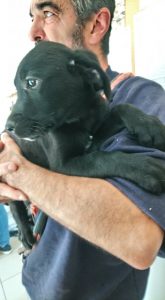 The first of the puppies of the Ebony litter has been adopted.

Another of today’s lucky adoptees was Venus. This little podenco cross was thrown over the refuge gates earlier this month, can you believe. Luckily she caught the eye of none other than dog behaviourist Vanessa. She came along to meet Venus straight away together with ex ScPA dog Lolipop, after which she reserved her pending the end of her pound time. Yes, even when dogs are flung unceremoniously over the wall, we have to respect the law. Grrr.

Vanessa has been back a couple of times since together with her baby (whom Venus adored at first sight) to walk Venus and get to know her a bit better. And today was the day that Venus, now identified and sterilised, left for her new home. Needless to say we will have news and photos, and who knows, these might feature a Llama or two, as well! 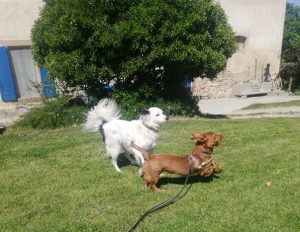 The original title of this blog was that three dogs had been adopted,  including Bezingha. But in fact it was three plus Bezingha! Another very lucky dog today was old boy Kayzer. He was brought to the ScPA following the death of his owner. However a friend of the family could not bear to think of him there, and managed to find him a new home. And it is not just any home, it is with a great friend of the refuge, a wonderful woman called Caroline who is devoted to animals and who has adopted from the ScPA before. So Kayzer’s troubles are well and truly over! 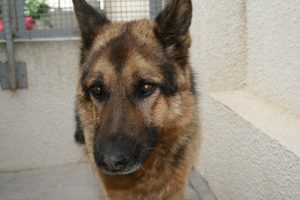 Many thanks to all of today’s adopters, today was a great start to a new week.

2019-04-29
Darcey Dyson
Previous: OAP’s Day (Old Aged Pooches, that is)
Next: Adoptions of Goliath and Fossette