Three dogs leave, including an oldie :)

When Zoey arrived at the refuge we were sure someone would come looking for her. Firstly she was tattooed, (details no longer up to date and no trace of the people, despite our usual efforts). Not only this, but she had undergone a major operation to put a metal plate in her leg. This would have been very costly, so clearly someone loved this dog. Or used to.

Carole contacted all the local vets capable of carrying out such an operation, plus those further afield, but it was impossible to find anyone who knew this dog. So what do we do? Do we keep the dog (who is already 12 years old) indefinitely, or do we do what we are meant to do, ie give the owners 10 days to claim her then do our best to find her a new home, despite her age.

The latter of course. The refuge is hot and after all, Zoey arrived on May 24th. We cannot keep her for ever. Especially when thanks to Facebook, someone offers her a home! Yippee! Zoey left us today; another oldie safe and happy!

The young labrador who arrived yesterday after having seen straying for weeks in Carcassonne turned out to be micro-chipped. Moreover, his owner, who lives in Ille sur Têt in Department 66, has been actively searching for him since April 10th. She came to collect Boudha today and yet again we see the importance of identification. We will never know how he came to be so far from home, but the main thing is that dog and owner are happily reunited.

In other news we know that Atlas (now Sam) has arrived safe and sound and has slotted in with his new family and 2 female doggy friends (plus cats and chickens) without a hitch. Already off the lead and jumping into the family’s lake, like a normal labrador! “Papi” Tom is also a very happy boy. It made me a bit sad to hear that his owners’ only regret is that they did not adopt him a year ago, which would have saved him all that wasted time. Still, better late than never, and he, like Zoey, will not be a dog who dies of old age in a refuge.

We have several more oldies; they, especially the bigger ones, are the hardest to home. Open your heart! I know many people hesitate, as they know that they may soon be grieving, but this is not necessarily the case; even big dogs can surprise you in terms of longevity when they have a reason to live. And what better reason than a loving home?

At the other end of the age spectrum, puppy Jazz was adopted today too, on paper at least. Isabelle, who has been looking after him in foster, is delivering him to his new home tomorrow. Many thanks to her for saving this puppy from the heat and confusion of the SPA.

So three dogs have homes and we had no arrivals. A good day! 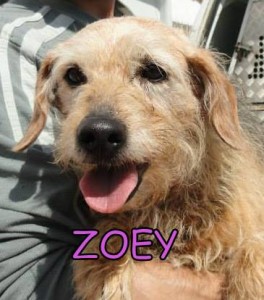 Boudha- missing for 2 months, Identified so reunited with his owner 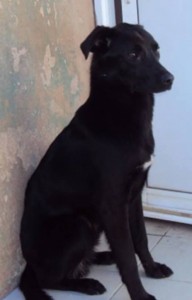 And Jazz is adopted too! 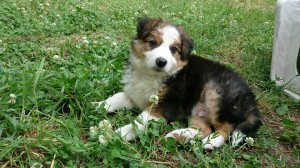 2014-06-13
Darcey Dyson
Previous: Atlas travels to his new home, Speedy is adopted too!
Next: Carlos leaves, four dogs arrive and leave and we visit Tom!