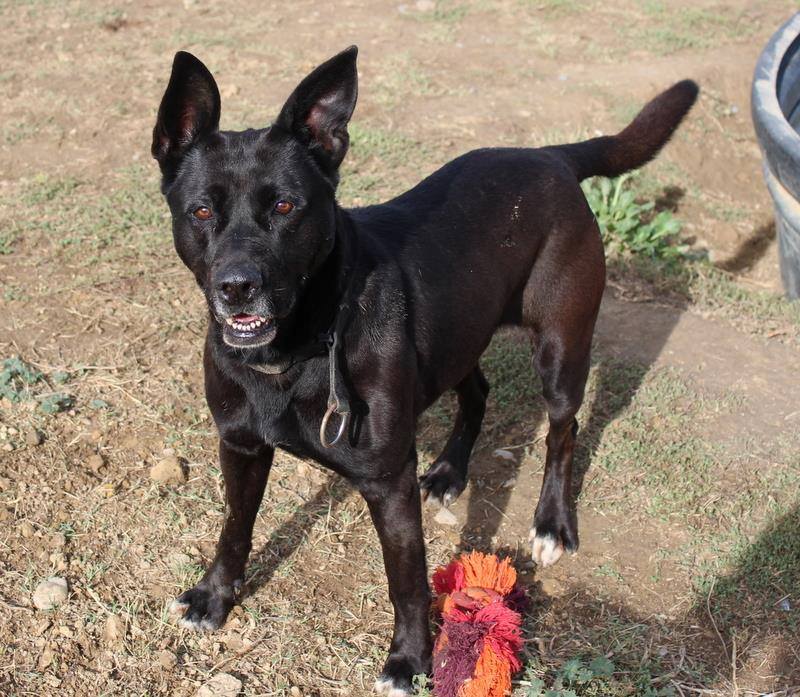 This week has been another quiet one, and although we were hoping for more adoptions before Christmas, we were starting to wonder if our hopes were to be dashed. However today we had three adoptions, only one of which was planned.

The second of the dogs who had been reserved at the weekend left today. Little Pilou, at the SPA since has found a new home. When this little boy arrived five weeks ago he was very scared, but the staff and volunteers soon had him feeling much happier. He loved sharing his box with another dog, and proved to be great with cats, too. His confidence on the lead grew every time he went out for a walk. And being small and easy to handle, he went on lots of walks.

At the open weekend a family came to introduce him to their mature mastiff cross, and little Pilou looked delighted at the prospect of sharing his new home with a big new friend. The adoption was organised for today as the family are now off work for two weeks, which should give Pilou, now renamed Bobby, time to settle in.

Wec also said goodbye to Pollux,  the tiny wire haired dachshund who arrived with Wednesday’s adoption Puce.  He is a great little chap, good on the lead but equally happy to be carried. Not surprisingly he hasn’t had too long to wait for a new home, and we are sure he will be very happy. Like Pilou he will be sharing his new home with other dogs!

All adoptions are good, but today’s final adoption might be this year’s Christmas miracle.

Lili has been at the SPA since July 2017, when she was found at the gates with a note from her owner. The note said that Lili had been adopted as a puppy, but she was no longer wanted. This may seem strange to us, but for some dogs that is how life is. They have no say in their future, they are just cast aside at their owner’s whim.

Lili is a big black dog who was born in 2009. Those of you who follow the blog will know that that combination; big, old and black, usually means a long wait before adoption. When Lili woke up in her kennel this morning, she surely had no idea that she would end the day in a home all safe and warm, together with two other dogs. She never gave up hope, and watching her lie on her back having her tummy rubbed as her new mum signed the adoption papers was lovely to see.

The SPA is open tomorrow for one last day before Christmas, so maybe there will be more news, but the week has taken a turn for the better thanks to today’s news.