Home / Latest News / Three in and three out, plus a welcome return (of a non-canine variety!)

Three in and three out, plus a welcome return (of a non-canine variety!)

Well, the news I hinted at yesterday came to pass; well one of the adoptions, in any case. For the other you will have to wait, there is a castration pending!
Today saw the adoption of Tyson. He is a Romanian shepherd cross who is one of the longest serving dogs at the refuge. He had been with us for 18 months this time, but it was not the first time he had been at the refuge. The first time he was returned due to wandering (he lived in the same village and kept coming back to play with his pals when he was left alone in an unfenced garden alone all day). The second time it was because he chased cars (er, hello!). This time we hope it is for ever. We have explained all his so-called “faults” and his new owners are prepared to put in some work. We are lucky in Carcassonne with several excellent dog training schools nearby.

The two puppies who were in foster care with one of our employees also left, and that same employee, the wonderful Carole, also returned from maternity leave today and is back manning the desk.She never really disappeared as she has been busy the entire time on the internet. I think she was trying to home dogs the same day that her son was born! Better yet, due to changes in French employment contracts, we are able to keep Melissa, who has been doing such a great job standing in for Carole while she was off.  Fabulous news, especially as both of them are qualified dog trainers, so they can both get out of the office and put some dogs through their paces without having to answer the ever-ringing phone.

Sadly we had three dogs brought in today, but who knows, maybe their owners are looking for them. Stranger things have happened! In any case, with the departure of Tyson and the return of Carole, today is officially a GOOD DAY! 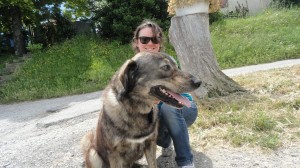 Syrah and Merlot, who were also adopted today, with Carole 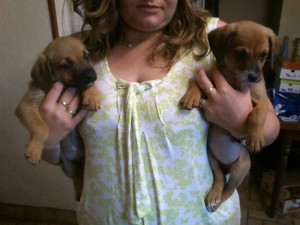 And the rest of Carole (whoever took that last photo was not looking at her face!!) 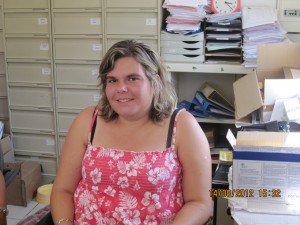