Home / Latest News / Three in but two out!

Three in but two out!

Today could have been better, but I guess the same could be said of just about every day.

The bad news first. Kaiser was brought back. Sometimes people mean well, but have to accept when they have taken on too much. Five children and two large dogs plus 2 cats is quite a big family already, without adding a third big dog to the mix. Still, as with all adoptions and fosters, we know a lot more about the dog now than we did before, so it is never all bad news. Kaiser went off to share his box with Panini, and didn’t seem too perturbed to be back. Next time lucky, big fellah!

One dog was found and another one was abandoned (pre-planned), so that is three dogs in in total. But two dogs were adopted.

First to leave was Sherman, and here it really was a case of love at first sight. By Internet, no less. A photo of Sherman caught the attention of a lovely lady, who just knew he was the dog for her.  She came along to meet him and was even more sure. A week  later and Sherman, this beautiful dog of nearly nine years old was off to a new home. As the photo shows, he is going to be well-loved!

Next to leave was Giseh. She may well change her name, but we are not sure to what. She has gone to be a companion to Castro. He is the blind,old griffon bleu de Gascogne who was adopted from the SPA not so long ago when he was called Ray.

The weather was good so plenty of dogs were walked and a couple of new volunteers joined the team.  So although things could have been better, they could have been a  lot worse, too!

Octo arrives. We think he is about eight years old, hence the name 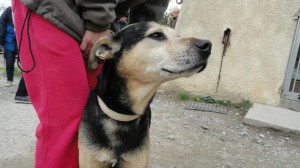 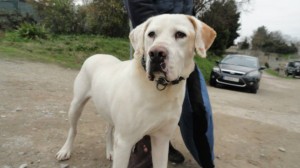 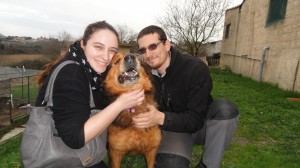 And Giseh leaves with Castro (aka Ray) 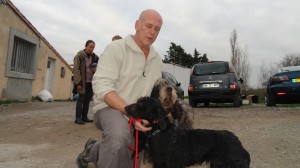 2014-01-11
Darcey Dyson
Previous: From Scrapheap to Safety
Next: The Breast Start For Pups..