We had three adoptions today, and as two of them were of tiny older dogs, that is great news.

First of Fullck. He was found and brought in towards the end of February; This 9 year old lad was identified, but his owner’s details were not up to date. So after ten days had passed without them coming to collect him, this little yorkie was looking for a new home. At first no one appeared to be interested in him. But finally a couple came to see him and decided to test him with their female yorkie. Today’s meeting went well and so Fullck has a lovely new home. Huge thanks to them. 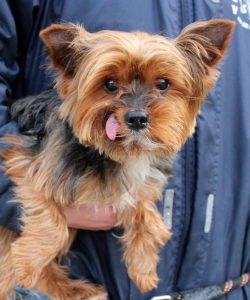 We also said goodbye to little oldie Mini Goliath. He was brought in following the death of his owner, and at first he was terrified. The first time I met him I thought I was going to lose a finger, but once out of his kennel, he perked up. It must be terrifying for any dog to find themselves in a noisy kennel after 9 years in a loving home, but especially so for a dog that weighs a kilogram or so.A family came to meet Mini Goliath today, and he was as delighted to leave as they were to adopt him. 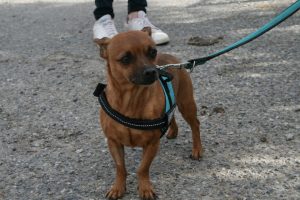 Both these little dogs were over 9 years old so count as “seniors”. This means their adoption fee was just €80. Considering they are now castrated, identified and vaccinated, it is hard to see why some people accuse the ScPA of making money from the animals’ misfortune.

Today’s other leaver was a young dog who has been with us since early November. We knew something of her history, as her former owner is well known at the ScPA…and not in a good way. When he failed to collect Zebuline, it really was her lucky day. Now sterilised, her life will be very different than the one that awaited her had she gone back home with this person.

Today this fabulous brindle girl left for a new home! 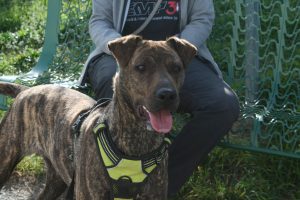 We wish all three of today’s leavers a wonderful time in their new homes and we look forward to news in the future. There were several people at the refuge looking for new companions, so we hope more good news is on the way.