Well, I am delighted to say that Peter Pan was adopted today. I felt really sorry for him yesterday when Wendy left and he was moved to live in the cat house to give him some company. Excellent news for this handsome boy

And that is not all! Puppy Catherine left, she of the Vampire Diaries litter. Just two of this litter left now, plus their mum, who has not been reclaimed by her owner. This is a huge relief for me, as I love this dog and I would hate her to return to a life of neglect, punctuated by producing unwanted puppies every so often.

The third departure was that of Master, yet another puppy, but one who arrived alone. So three pups are in the warm tonight, which is wonderful news for us. Two of the Vampire Diaries puppies are waiting patiently, and we have dogs of all ages, from 3 months to 11 years for those of you who prefer your canines to be more mature!

Further to yesterday’s blog, a couple of other people have sent us pictures of their dogs celebrating birthdays. These photos have already appeared on Facebook, so apologies to you if you have seen them. However not everyone has Facebook, and I know of one volunteer, Benedicte, who will be happy to see this picture of Biggles (now Pigale), who used to belong to an acquaintance of hers but who was unable to spend as much time with this young active dog as he needed. He is doing just fine now, and his owner is delighted with the health benefits to herself as well!

And last but not least is Bill, who has just celebrated his first birthday and as you can see, is being spoiled rotten. The Brits are not the only ones who are potty about their dogs to the extent of baking them birthday cakes! 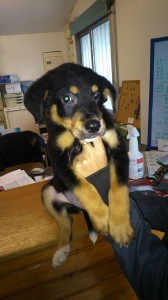 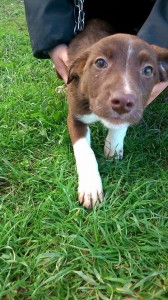 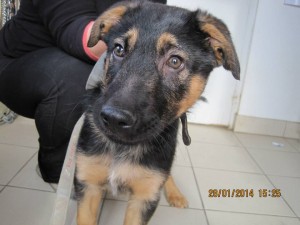 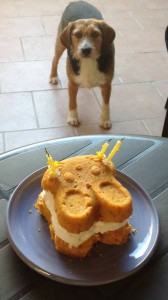 And Bill is one! 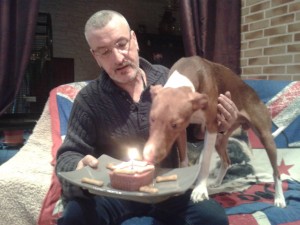 2014-02-07
Darcey Dyson
Previous: Adoptions and news of old (and not so old) friends.
Next: Two lovely adult dogs are adopted!