August at the refuge is a time when adoptions are usually few and far between, with lots of people still on holiday. However this year seems to be bucking the trend. There were three adoptions today, and although dogs continue to arrive, the steady stream of adoptions means that the SCPA is coping reasonably well with the summer influx of lost or unwanted canines.

Prunelle is a fabulous tri-coloured spaniel cross, and is one of four recent arrivals who are doubtless related. All were found in the same village and are remarkably similar. We have no idea of their background, but they are lively affectionate dogs who are between 2 and 3 years old, according to the vet. In fact if you like spaniels, the ScPA is the place to be, as there is a huge choice at the moment. 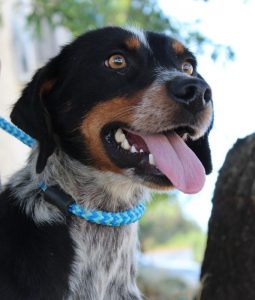 Alex has been with us since late May, and is a lovely long haired black dog who has been sharing his kennel happily with lovely border collie Poma. During his time at the refuge he, like many of our dogs, has enjoyed some fabulous walks and plays in the river. We hope that he, like Prunelle, will be very happy in his new home. 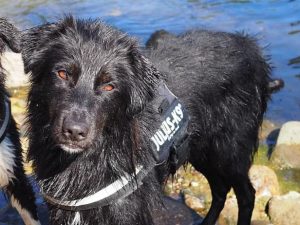 Last to leave was puppy Priska. She is a gorgeous little lass; little for the moment at least. This girl is going to be big, big BIG! She dwarfed puppy Bruno, with whom she was living until his recent adoption, and has a lot more growing to do, as she is only three months old. Her new family is used to big dogs, however. They already have a 50kg dogue Argentin, who was very gentle when meeting his new baby sister. It is lovely to see yet another puppy leave the refuge before growing up too much, so many thanks to Priska’s new family. And all today’s adopters, in fact. 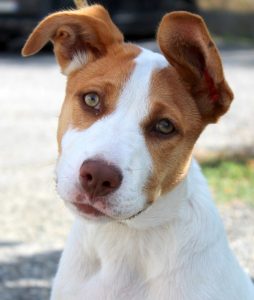 Recent arrival Randy (in real life Jack) was reclaimed, and is now identified, obviously. So that is four fewer dogs at the refuge tonight, and hopefully there will be even fewer there this time tomorrow.