Today the refuge was closed so tonight’s blog is on a subject that we are asked a lot about, toilet training pups! Just like everyone has opinions on potty training children you will get lots of advice from everyone about toilet training your pup but at the SPA we recommend using crates to give the pups their own safe space and also for toilet training.

Toilet training is all about creating good habits. Young pups have very small bladders and very little bladder control so they need to be in the right place when nature calls.

To toilet train successfully in as short a time as possible you must take your puppy to the garden:

After taking a drink

Before, during and after a period of activity

When you come in

Before you go out

And every twenty to thirty minutes in between unless they are asleep.  During periods of activity change that to every ten to twenty minutes.

Take the pup outside and stay with your pup, don’t nag or distract him just stroll  about and once he has done what he needs to tell them him he is a clever boy.

If you have to take him back in and he hasn’t done anything outside then either confine him to his crate, sit him on your lap or tuck him under your arm (small breeds only) as you go about your chores and try again in five minutes.

It is imperative that you do this, especially if you have started off with newspaper down or puppy pads because your puppy may prefer to wee indoors and he could simply be waiting to be taken back in.  Give him zero opportunity to go wrong.

Here are a few common mistakes during toilet training:-

– Using newspaper or puppy training pads.  Whilst it may help the clearing up process it can be very confusing for the pup that is taught or permitted to toilet in the house to make the transition to going outside and will often result in a pup that when playing in the garden will simply hold on until they are back indoors because that is where the toilet is.

– Leaving the door open. This does nothing to teach the pup to toilet outside and reprimands for toileting in the house will result in a dog that believes you disapprove of what he did not where he did it and is damaging to your relationship with your pup.

– Giving treats for toileting in the garden, again the dog is being rewarded for what he did not where he did it.  Whilst this is not going to be as big a problem as the reprimand, the clever dog will learn to do lots of little wees and never fully empty their bladder.  The insecure dog may wee indoors to appease you if you get cross about something else because they know that this is something that pleases you and gets rewarded.

– Expecting your pup to tell you when he needs to go out.  Once a pup understands that outside is where the toilet is then he may start to let you know he needs out.  However if you are not there to ask or you fail to notice him asking then the house training will break down.  Far better to have a dog go out to the toilet on your schedule once they are house trained.

– Giving your pup an ensuite in his crate.  Do not encourage your pup to toilet in his crate by putting puppy pads in there.  If you have to leave puppy for a while and he is going to need to go then best to have the crate inside a larger pen or blocked off area and leave the crate door open so that he can get away from his bed to toilet.

During the night young pups will need to go to the toilet once or twice in the night for anything from a few days to a few weeks.

If your pup is sleeping in a crate in the bedroom with you, then they will wake and should let you know they need to go out.  Carry pup to the garden to toilet and then straight back to bed again. If you choose not to have his crate in the bedroom make sure you can hear him or you will have to clean up in the morning!  Don’t feel guilty about having a crate in the bedroom, Leaving a puppy to cry in a crate or downstairs alone is teaching the puppy to associate the crate and night time with being distressed. Should you wish you can move his crate further away as the pup gets older and can hold on all night.

The good news is that this stage doesn’t last long and as very few pups like toileting where they sleep, the crate will encourage him to wait. Before long you will have a pup that understands that outside is for toileting and will happily run to the door to do out!

Clever boy…outside is for toileting! 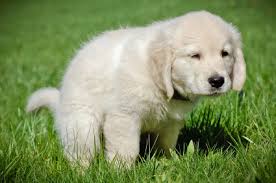 Papers help with the clean up but you are teaching the pup its ok to toilet inside. You then have to teach him to go outside so this method takes a little longer. 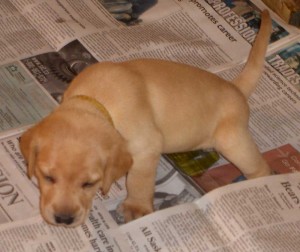