As some of you may have noticed I have been absent for a week or so. Thus apart from a few log-ins in between meetings, I like you, have been following the goings on at the refuge via the blog. Like you, I noticed the large number of adoptions. Like many of you, I have been wondering how many dogs had arrived during this period. The SPA Facebook page is normally pretty up to date, but of course if no one is there to take the photos, then it falls behind.

So although I was looking forward to going to the SPA this afternoon, I wasn’t quite sure what to expect. Was Moira hiding the inconvenient truth? Was the place fuller than when I left it? You, like me, will be pleased to hear that things have not been too bad on the arrivals front. While I was away the total number of dogs went up by just two! But I seem to have brought bad luck, as two more arrived today.

First was Praline, who was adopted from us in January. He was given away by his adopters several months ago (which is clearly against the terms of the contract), and apparently even the new owners didn’t want him. They went on holiday leaving the dog outside, and the children inside. No comment. We contacted the original owners, who sent us an email to say they no longer want the dog. So Praline, whom we have renamed Iron, is available for adoption. He is eight months old today. It makes me sad, because his brother, Cacao (renamed Kobi) was adopted by volunteer Rosa and is having a wonderful life. Still, let’s hope Iron has more luck next time around. If you like lurcher-y types, he could be for you!

The other of today’s arrivals is a lovely girl whose owner died. She is called Dali and we know that she is not good with cats, which is why the people who took her on after her owner’s death are unable to keep her.

But there was some good news, too. And I am talking good news with a capital G!

This is fabulous news, and I know that Dominique will be crying as she reads this. She has sponsored Tom since he arrived and walked him religiously every time she came to the SPA. It is a huge relief to all of us that this lovely old boy has found a home, and better news still that it is with neighbours of mine, and I can pop in at any time to see him. If she is good I may even invite Dominique along!

So two dogs out, and one in. The place was in good hands while I was away. Ever felt dispensable? 🙂

New arrival – IRON (ex Praline). Found in a rubbish dump, adopted as a puppy, given away and now back at the SPA, all by the age of 8 months. 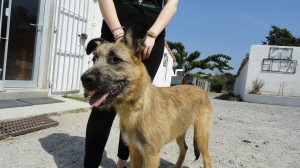 But guaranteed to raise morale – Tom, adopted at the age of 11 and a half 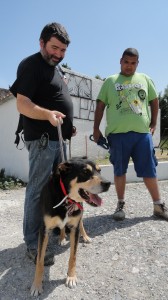 2014-06-10
Darcey Dyson
Previous: Fundraising and prizewinning!
Next: A quick in and out for an identified old dog!