Tonight I am very angry

The day started off badly and got worse. When arriving at work the employees were greeted by five very young puppies. And I mean VERY young. Who knows if they will survive. The person who left them there clearly doesn’t care. Keep your fingers crossed for them (there is a picture of one of them, below, they are the Celebrity Litter, this male is called Mabrouk).

They were closely followed in by five kittens,  four from the same litter, plus an extra one who is really tiny. Why don’t people sterilise their animals?

The thing that has made me really angry, though, is the story of a certain dog. We call her Kitty, though her owner calls her Princess. And not because she is treated like one; not at all. We saw Kitty for the first time several months ago, she was identified and so when her owner came to collect her we let her leave on the proviso that she took her dog to the grooming salon. Kitty came back three weeks ago, and I have never seen a dog in such an appalling state. As I hope the photos show, her fur was so long that her paws looked like ducks feet. She could hardly move as the fur under her arms was all matted. Before giving her a haircut we took photos and called in the cruelty inspector to have an independent witness . The vets certificate says that the dog has an untreated leg fracture and a tooth abscess has become so infected that Kitty has an eye infection.

Her owner came to reclaim her yesterday (our attempts to hide her failed) and is taking us to court to repossess the dog. Why do people like this even want dogs?  For the moment Kitty is safe, living with a foster family. Her eye was operated on today. We will do our best to keep her away from her former owner, but so far we have a zero record of winning cases like this. It costs us lots of money, which we don’t have, and lots of time and heartache, too.

That is why I am angry!

Mabrouk, one of five puppies who arrived today 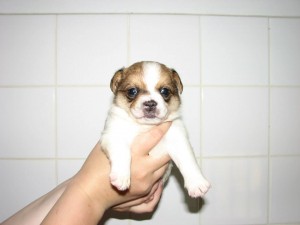 Kitty. Would you let the owner have this dog back? 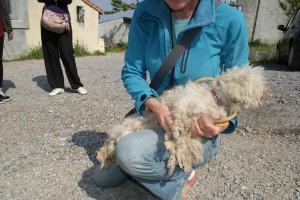 2013-06-21
Darcey Dyson
Previous: Three in and three out, plus a welcome return (of a non-canine variety!)
Next: High drama at the SPA