In the first of three wonderful news items today, we have the adoption of Texas, hopefully bringing to an end the rather disrupted life this dog has had recently.

Texas was rehomed directly from his former family last year, then brought to the SPA (together with recently rehomed English bull terrier Gino) when his new owners no longer wished to keep him. This was a total shock for Texas, who was not at all suited to life behind bars. When not sharing his kennel with another dog, this boy would perform Houdini-type feats of escape, all to search out company, be it canine or human. Worst of all, if confined to his cage, he used to press himself against the bars looking miserable.

He is a beautiful dog, so inevitably there were several people interested in offering Texas a new home. But there is no point letting a dog leave for an unsuitable home. Yesterday’s visitors looked far more promising, however. They have two huskies, and a well-enclosed garden. But would the dogs get on? Cue Vincent, our dog-whisperer, who supervised the meet and greet today.

Texas left with a huge smile on his face, and his joy was shared by all the staff and volunteers. Long and happy life to you, Texas. 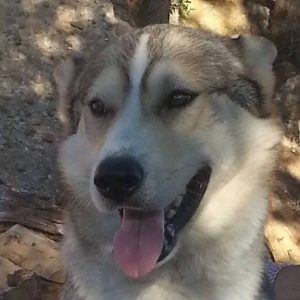 Next we said goodbye to Queenie. She arrived a couple of weeks ago, together with a tiny podenco cross. Both dogs were thin and timid, but the lovely SPA staff found a place in the warm for them both. As neither dog was identified we had no way of contacting their owner(s), and of course the best thing was for them to find new homes. Lovely Queenie was sterilised today, and has gone to live with a volunteer! We are not sure if she knows yet, her husband is planning on surprising her this evening, so no names. But we will have lots of news of this little lass. And don’t feel sorry for Queenie’s podenco pal; she will be leaving very soon as well. 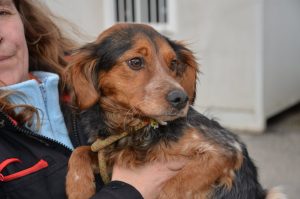 Finally today we can tell you that bruno de Jura Finn (now Fynn;the Y is a very important letter for personal reasons) has been officially adopted. Most of you will have read about him; wandering in a nearby village and evading capture for several months before making it to the safety of the SPA in mid-December. His arrival coincided almost exactly with the tragic death of adored ex- SPA dog, Lily-Blue, and her owners took this as some kind of sign.

Other signs were of course Fynn’s unfeasibly long ears (Lily-Blue won three of the prizes in last year’s DRC dog show, including “dog with the longest ears”), and the fact that he was timid but trusting and loyal. And good with cats. Yvonne and Henny followed Fynn’s progress at the SPA, and by attrition he worked his way into their hearts. A couple of weeks ago they offered to foster Fynn to get to know him, but by then I think we all knew that the writing was on the wall. Regular updates showed just how much they had fallen under his spell, especially after he and their cat started sharing a basket (on day four). And then the announcement on their Facebook page, LangueDog, told us what we had already guessed; Fynn is staying right where he is. 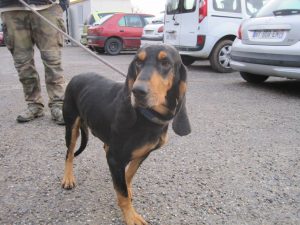 This is the best possible news for this lovely dog, and shows once again how quickly and dramatically a dog’s life can change once he gets to the SPA. Yes, Fynn still has a long way to go, but he is in the best possible place to develop. He is already attending dog school, where, to quote Yvonne, “he continues to impress in a handsome, quiet kind of way”. And he will not be short of love and affection, that is for sure. Many thanks to Yvonne and Henny for opening up their huge hearts to this boy. They have promised us a story for “Life after the Refuge” in due course and that will be a fascinating read.

DRC sponsored Fynn while he was at the SPA. Moira was one of the team who fed Fynn and tried to catch him for several months. And I walked him at the SPA while he was there, seeing him evolve from a terrorised newbie to an affectionate and relatively happy boy. So we both feel very close to this lad. We couldn’t be happier for him. It is almost as if he is staying part of the family. 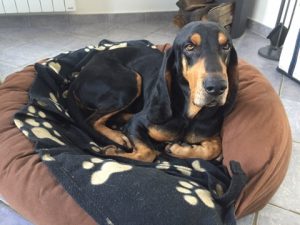 And a much happier looking Fynn – ADOPTED by his foster family

And more good news is on the way tomorrow, too.