Two adoptions and missing moggie Molly is reunited with her family.

There were two adoptions today, to brighten an already sunny but windy day.

Believe it or not, the third of the six Greek God(esse)s was adopted. For a group of unwanted dogs, they have certainly had a lot of success finding homes! Today it was the turn of the eldest of the group, Peanuts. Yes, we know that is not the name of a Greek God, but she arrived a couple of days after the other and was not named by the same person.

At ten years old, Peanuts needed a bit of good luck in finding a home. But in fact all it takes is the right person to come along at the right time. Today an elderly gentleman came along with his daughter, and Peanuts was just what he was looking for. So this lovely girl has gone to spend her retirement luxuriating in the warm, with lots of long walks and affection. How quickly a dog’s life can change, and this time it is most definitely a change for the better. 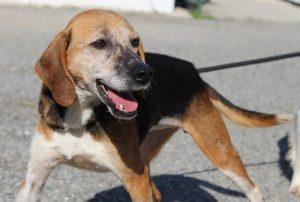 We also said goodbye to Logan. He was found at the end of October, tied to a lamp post next to the canal. He was not identified, but in any case assuming that it was his owners who left him there, it is just as well they did not come to reclaim him.

The vet’s estimate has his birthday as being March 1st 2018, but I like to think that he was wrong, and that in fact today is Logan’s first birthday. In any case, he now has the best present ever; a home of his own. 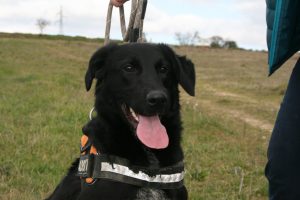 Finally news from the feline side of the house. Today a cat was reclaimed some 18 months after she went missing! Molly was found earlier this week 30 km from where she was last seen. Her owners have moved house since, but never gave up hope of finding her again. They made sure their details were up to date on the database and constantly scoured the internet for sight of Molly. We have no idea what she has been up to all this time, but she seems none the worse for her adventures and is now back home with her family. 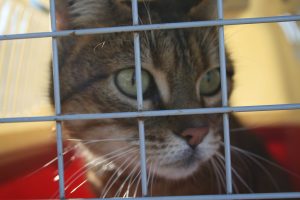 Molly- RECLAIMED after being missing for 18 months

A lesson yet again in the value of identification, be it of a dog or cat, and wonderful news on which to end the day.

2019-03-26
Darcey Dyson
Previous: Adoption of Athenais
Next: Adoptions of Laika and Snappy