Two adoptions and some heat-busting DIY

Today the SCPA was open despite the fact that it is both Sunday and Bastille Day. And it proved to be well worth it, as there were two adoptions!

First to leave was puppy Venisia, one of a litter of five labrador cross puppies who arrived at the refuge 10 days ago exactly. It would be very unusual for a litter of pups to be reclaimed, but it has happened in the past, and so the pound time has to be respected. Venisia, like her brothers and sisters (there were 3 of each) is simply adorable, and we have already received a photo of her, now renamed Gaïa, looking even cuter than she did at the refuge! Many thanks to her new family and we look forward to more news and photos of her as she grows up. 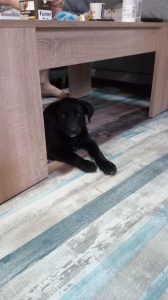 Today’s other adoption was that of Bailey. He is a stunning cream coloured border collie cross who arrived at the refuge about 6 weeks ago having been found in a nearby village. An adorable boy, he is fine with just about everyone and it was wonderful to see him playing with his new family’s other dog, a tiny jack russell / pinsher cross. We do not know what his life was like before the refuge, but it looks like it is going to be fabulous from now on! 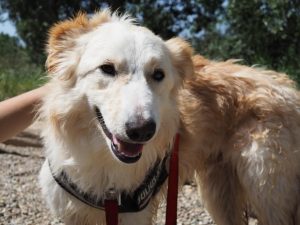 The final news of the day is welcome for anyone who has been concerned about how the dogs are coping in this searing heat. Well never fear, the DIY Team, led by Philippe and ably assisted by Thierry, Michelle and others, have been on the case. The lucky dogs in the lower kennels are now able to refresh themselves thanks to the new misting system. This is something that can ben seen in some fruit and vegetable stores, whereby a gentle cold spray is released downwards from a narrow hose. The cooling effect is remarkable and the temperature in the kennels is already much lower. 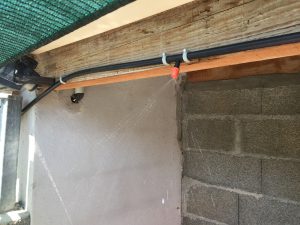 It is wonderful to see these improvements taking place at the refuge, and shows the dedication that the staff and volunteers have towards the animals in their care. Several of you lovely DRC supporters have already sent donations with a view to helping to keep the dogs cool, and assuming this system can be rolled out to other boxes, you will soon see the results of your generosity!

Have a lovely evening for those of you in France, but remember to keep your pets safely inside!