Two adoptions and two reservations, Plus four dogs are reclaimed!

Before the refuge had opened and before many of the staff had even arrived for work this morning, we had our first adoption! Little Vixen, one of our Golden Oldies, had left on the long journey to Brittany to meet her new mum, who had fallen in love with her on the Internet. This was not Elaine’s first adoption from us, she gave a wonderful new home to arthritis-sufferer Ebene (now Ebony) over two years ago. She is now getting the best of care, and the same will undoubtedly be true of Vixen.

Many many thanks to Martine for being “foster mum” for so long and for keeping Vixen, who is about 13 years old, out of the heat of the refuge. It was not easy going at first, as Vixen wanted to “play” with the cats, but a bit of patience and understanding sorted that out, and Vixen had a lovely time until she was able to travel to her new home. Thanks also to Doglinks who sent Elaine our way, just as they did for Ebony. Martine’s house must be quite quiet, were it not for puppy Scampi and all the cats, that is!

That was not the only adoption of the day. Lovely Olaff, who has been with us since being rescued from being thrown off a bridge in Limoux went to his new home! What a wonderful turn his life is about to take, from the abused dog of a violent man, to a beloved family pet, all in the space of six weeks! Olaff is only 18 months old, so very soon the horrors of his past will be forgotten.

There were two more reservations, and believe it or not, four of the five of the dogs who arrived yesterday (I know, I didn’t tell you, because I didn’t want to worry you!) were reclaimed!

Not such a bad day, all in all. 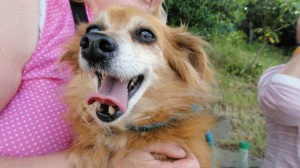 Olaff- from abuse to happiness in six weeks 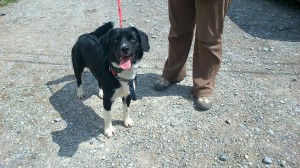 2014-08-12
Darcey Dyson
Previous: Isa and Canelle on tour, plus four adoptions!
Next: Adoption of Rex after 15 months!