Two adoptions (at last) and some more great news.

Well, it has been a long week, waiting for the first adoption. At last today two, no THREE) dogs left the refuge for new lives.

Of course the week has not been without good news; many dogs arrived and departed, including this little lad, Kevin, who was reclaimed yesterday. No, Kevin is not his real name, and now should he go missing again, anyone checking his new microchip will see his real name; Filou! So perhaps if you don’t want to see a photo of your dog on the internet with a ridiculous name, you should get him or her identified! 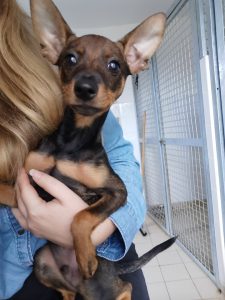 Kevin (not his real name!)- RECLAIMED

Now to the adoptions. First off was Bambi, a small sized crossbreed who arrived a couple of weeks ago. We knew who his owners were, hence not publicising his photo on Facebook to try to find them, and by the time they confirmed they would not be reclaiming him, he had already been reserved. Not bad, eh? For anyone who notices the resemblence between Bambi and Hermione, you are not alone. And as he came from the same place, we are pretty sure there is a family connection. 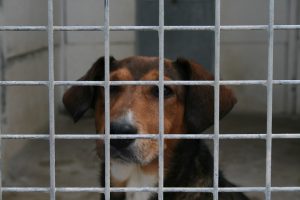 Second to leave was yet another of the ScPA’s hidden gems. After almost four months at the refuge Olaf has a home. This young pointer (maybe) cross arrived towards the end of June at the (estimated) age of 18 months, and it has taken him far longer than many of us expected for him to find a home. He is a great little lad who is fine with anyone and anything, and he has been a great favourite on volunteer-led excursions from the refuge. 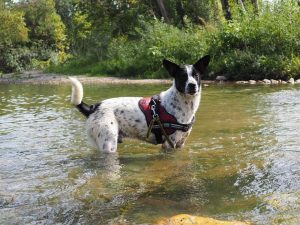 Then things got even better; Porcelaine, our old lady huntress has left for a long term foster home! Porcelaine is 10 years old and has never known life inside, so she has a lot to learn. She is very lucky to be given this chance; please don’t blow it, Porcelaine! 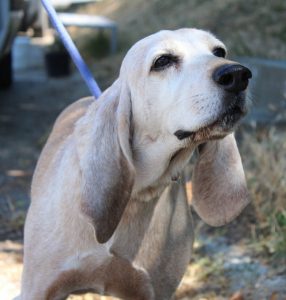 The week is far from over; we still have the weekend to come. Let’s hope there is more good news to come. But today’s news has already gone a long way to raise our spirits.

2019-10-11
Darcey Dyson
Previous: The Dreaded Parvovirus; What is it?
Next: Adoption of Lulu