Today is Assumption Day and hence a bank holiday in France as in many other countries, but the ScPA was open for business as usual. There were plenty of volunteers on hand walking the dogs and cuddling the cats, and there were two adoptions, meaning that opening was definitely worthwhile.

First to leave was Gretel. She arrived with big handsome black lab Hansel towards the end of July. She is a pretty, dainty little girl and it didn’t take long for her to catch the eye of a family. She left today looking very pleased with herself, although a little bit sad to leave Hansel behind, of course. But dogs, even those who have been together all their lives, adapt very quickly and Gretel will be no exception, we are sure. 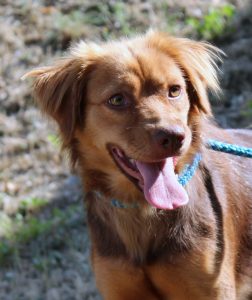 Next up was Poma. This fabulous border collie has been with us for quite a bit longer. She was brought in almost eight months ago with two other dogs, all of whom were rescued from an apartment after their owner moved house without them. Her two pals were adopted some time ago, and why Poma has waited so long is a mystery to many of us. Surely the fact that she doesn’t like cats can’t be the reason!

Poma is a delight; she is very devoted to humans and the fact that her new owner plans to take her everywhere with him as he works in his vineyards sounds ideal. As you can see from the picture below, taken on one of the magnificent walks offered by the volunteers, she adores the outdoor life. 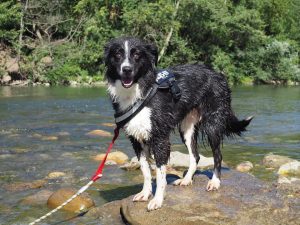 There are three more days of the week to go and we are hoping for lots more good news.