The afternoon started excellently, with the owners of yesterday’s old beagle coming to collect him. Riki is 14 years old and his owners have been at their wits end trying to find him. He was identified, but the people who found him did not do what they should have done, ie take the dog to the vet to see if he was micro-chipped, or even contact the SPA to let us know they had found a dog. Instead they kept him for ten days before bringing him in. Meanwhile his owners have been in tears, wondering what had happened to their dog.

I am sure the people who found Riki meant well. But in fact they did the wrong thing. If you find a dog, please take him or her to a vet to see if he is micro-chipped or at the very least let us know that he is with you, so we can put his photo on Facebook or other social media sites. In this case it would have saved the owners nearly two weeks of worry.

Another dog left with his owners today, Galahad, the wonderful Newfoundland was reclaimed. We had a feeling he wouldn’t be with us for long, and we were right. Like Riki he was identified, which of course helps!

Other than that there was not much news from the SPA, apart from the arrival of yet more kittens. This lot were left in the outside cages when the refuge was open. How courageous of the person who left them. The situation is catastrophic, if you will forgive the play on words.

One other thing I would like to point out. People have fought long and hard and signed numerous petitions to change the status of animals in France. Until recently they had no more rights under law than an item of furniture or any other inanimate object that can be purchased. This is no longer the case. If you are thinking of returning an animal you have adopted from us, there is no time limit by which you are guaranteed a refund of your money. Read the contract that you signed when you adopted; phone the refuge and discuss your issues. If getting your money back is your main motivator in terms of timing, then perhaps owning an animal is not the best decision you could make. Problems can quite often be resolved, but having a clock ticking down the days helps no one, especially not the dog or cat.

A word to the wise, as they say.

Riki- I am 14 years old and I was reclaimed as soon as my owners knew where I was! 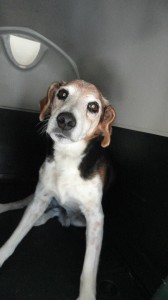 Galahad – My owners came to collect me too. Phew, it was hot in there! 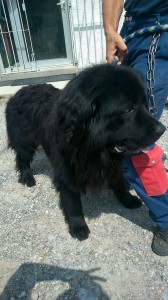 2014-08-06
Darcey Dyson
Previous: Another puppy day – but in the right direction!
Next: Adoption of Marla and more baths!