Well, last night’s blog has provoked much discussion, as expected, along with a fair few anecdotes. The only thing I would like to add is that whereas castration/ sterilisation will not necessarily change a dog’s behaviour,  it will DEFINITELY stop it having puppies, and fewer puppies means fewer adult dogs in refuges.

As you know, yesterday was the SPA regular Sunday open day. And whereas there were no adoptions, there were lots and lots of walks. I lost count of how many dogs got out in the lovely sunshine, so thanks to everyone who came along and thanks to Di for (wo)manning the cake stall. We were spoilt.

Someone else who was spoilt yesterday was the old man of the SPA, whom we had named Hordage (which means literally “past his expiration date”). He had been brought in just over 6 weeks ago as a complete bag of bones after yet another case of mistreatment. We did our best for him, feeding him the best quality food (thanks Nath) and letting him sleep in the warmth of the infirmary. Despite initial hopes that he would recover, we soon realised that it was not fair to make him struggle on. He could no longer hold himself upright and would fall several times per day. Yesterday he spent a couple of hours in the sunshine being patted and fed cakes, and this morning we said our final goodbyes.  Hordage was spoken to with gentle words and held lovingly as he went over the rainbow bridge, because that is how we do things at the SPA Carcassonne. We will miss him and it was a sad way to start the week.

On a positive note, the lovely boxer who was at the gate yesterday morning found his owner (thanks to the photos put on Facebook) and he is now identified. Hercule (aka Houdini) , who is a regular visitor, was collected yet again by his ever patient but despairing owners.

Less positively, just after the staff left the refuge for lunch, a small female dog was abandoned in the outside box. Such courageous people; they couldn’t even bring their dog in and tell us a bit about her so that we could find her a suitable home. Chispa is quite distinctive looking, a dachshund sized spaniel, and so if you know who her owners are, please let us know, as we would like to contact them.

Chispa is not the only new arrival. As Facebook pictures make clear, after a week of mostly good news and several adoptions, the refuge is full again! 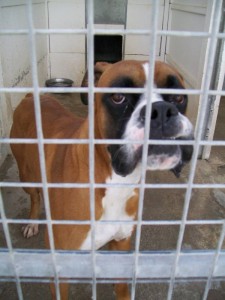 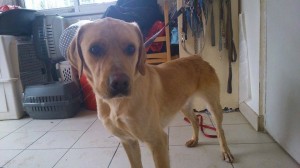 Chispa – Found at the gate. Two other dogs arrived aswell 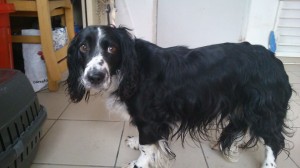 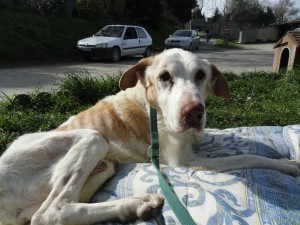