Home / Latest News / Two happy reunions in amongst the madness.

Two happy reunions in amongst the madness.

Well, today was my first day at the refuge for just over a week, and the change in the atmosphere was palpable. In terms of capacity we are at breaking point. I have just been getting the update ready for the site, and I been adding biographies of the sixteen dogs that have arrived during my absence. The heat is not helping, with walking not really an option so the best we can do is shower the dogs and hope this cools them down a bit.

As ever, though, there was something to smile about. Firstly was the arrival and almost immediate departure of Venus. There were alerts out for this English setter who went missing during the thunderstorm yesterday. As well as being elderly, Venus is diabetic, and her owners were frantic with worry. They had contacted the SPA as well as other websites. So when two lovely ladies arrived with an English setter whom they had found, our eagle eyed secretary, Carole, made the connection. Venus’s owners were contacted and they hot-footed it to the refuge, delighted to find their beloved pet. Venus has now had her injection and is doing well after her adventure!

Contrast this with all the people who abandon their dogs at the first sign of illness (says she, still furious at the owners of Hector)

Then the mayor of a local village arrived with a beautiful golden labrador who had been found wandering. Max was micro-chipped, and his owners were overjoyed to hear that their boy was safe. There is a certain mystery as to how Max covered 35 kms in two days in 35 degrees heat. We suspect the involvement of a malicious human, but all ended well and Max is now back at home.

One dog arrived today, she has been with us before and believe me, she is better off where she is now. 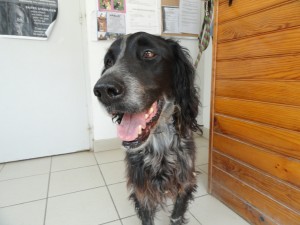 Max, how did you get all that distance? 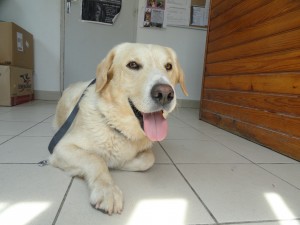 2013-07-11
Darcey Dyson
Previous: Visiting some of our dogs who have gone international!
Next: Some good news!