Please can everyone vote in this on-line competition. It is to support the wonderful Belgian association Animal Trust, who as many of you know have taken quite a few dogs from the SPA Carcassonne. All you have to do is click on the link, add your email address then confirm your vote by responding to the follow up email. It takes very little time and virtually no effort, but the €1000 euros which Animal Trust could win will make a huge difference to them.

A bit like the SPA Carcassonne, Animal Trust does not get any state aid. Okay, unlike the SPA they do not act as “the pound” and so are technically not obliged to take dogs. This means that they can control the number of dogs they have at any one time. However Eline and Kevin are huge dog lovers, so of course they often take dogs that are in need or who are not easy to home. And of course they have worked miracles for many a dog from the SPA. €1000 will go a long way to help them out financially, so let’s get to it, guys!

At the SPA we had the adoption of two littlies. First to go was Duck, a tiny boy who arrived about five weeks ago. He had an area of scabby-looking skin on his lower back so he was effectively quarantined until we were sure it was nothing nasty. He had his first grand outing at the November open day, and he turned out to be a fabulous little chap, although admittedly not everyone’s cup of tea looks-wise. But he played catch in a way that would put many retrievers to shame, and was just so charming that we all fell a little bit in love with him. I am so pleased that he has a new home! I wasn’t quite sure what to make of the message from the SPA today to say that the Gremlin had left!

And also happily little Eloi didn’t have long to wait after the adoption of his sister yesterday. He has been adopted by friends of volunteer Veronique, which means that we will have news of him.

And (hush) there were no arrivals. 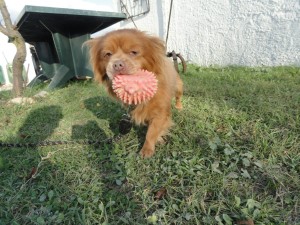 Eloi – ADOPTED the day after his sister. 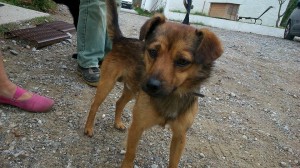 2014-11-19
Darcey Dyson
Previous: Adoption of Iona
Next: The sad return of Duck and I mess up! But good news for cats!