Three adoptions today, although one of the three was already in a home. Read on and all will be revealed.

First off was Capucine, now renamed Layla. When this puppy arrived at the refuge in early March she was all bald and pink. She had a nasty skin complaint which took several weeks and many many trips to the vet before being cured. As soon as she was able to be walked, one particular volunteer was waiting eagerly to be first in the queue. And ever since this first walk, Petra has been in thrall to Capucine. However having three dogs already (including another ex-baldy Pepper (ex Denver), she was determined to not crack and take her home. As time has gone on, though, with no one else wanting to offer this young girl a home, Petra’s determination had begun to waiver.

And on Wednesday morning, she finally cracked! Petra had fostered and subsequently adopted Anglo cross Celeste (Sally) last year, but this ended tragically when Sally died from poisoning when out on a walk.  Capucine is a bit similar, though hopefully without Sally’s tendency to wander. At six months old, Capucine is the perfect puppy, playful and full of fun. At the time of writing, Layla has met all the pack and all four dogs are getting on wonderfully, so her new life has got off to a great start. 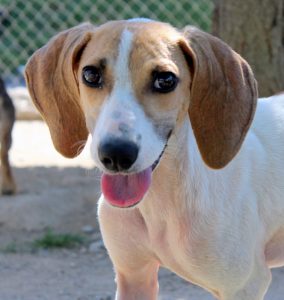 Still on the subject of puppies, another of the Ebony litter was adopted today. This time it was the turn of Rowan. I asked if she had been given that name (which is a variety of tree, like all the Ebony litter) because she was the most beautiful of the females. However I was informed that she was the one who eats the most, which is what passes for humour around these parts. (Bit of an in-joke there, please forgive me). So that is another lucky pup in a new home. 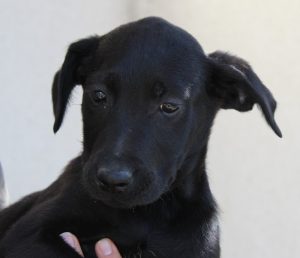 Now to the other end of the age spectrum. We have some heartwarming news about one of our oldies who until today was in foster. Cyndy is so enthralled by Boule, that she decided to formally adopt her. So as of today Boule’s status changes from that of being in a foster family to being officially in her new family! Huge thanks to Cyndy, and what a lucky girl Boule is.

What will the weekend bring? Let’s wait and see! 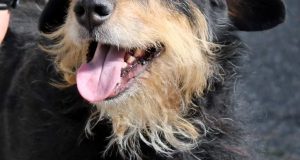