Two adoptions on a Monday is great news so let’s hope that its the start of a really good week!

Today’s lucky two were both pups. First to be adopted was Beary, a very cute ten week old berger cross. He was quickly followed by tiny terrier Alvin who arrived about 6 weeks ago with a fractured leg which was repaired by our vet. After some tlc he was soon ready for adoption.  At only 8 months old he has a great future now that he has a super new family!

We love seeing our pups being adopted quickly, its so important that people consider adopting a pup rather than buying one.

If you are considering a pup please bear in mind that no matter how “reputable” you think your local pet store is, they are almost definitely getting their puppies from one of two sources:  a “backyard” dog breeder, or a puppy mill. How do we know this? Because no responsible breeder would allow their pups to be rehomed this way! The majority of dogs are the product of irresponsible “backyard” dog breeders. These are people who make some easy cash by breeding their dogs and they often sell dogs through the newspaper classified ads. Remember that most of these backyard dog breeders don’t know about breeding for favorable health and temperament qualities, and they don’t know how to raise a properly socialized litter. Many of these little pups are weaned from their mother’s way too soon. Sometimes, a backyard dog breeder turns into small-time puppy mill to increase their supply so you can buy a dog from a pet store and they can make a higher profit.

What are puppy mills? A puppy mill is basically a puppy factory farm where the puppies are just churned out as fast as they can and then sold to pet stores. The dogs are kept in small cages and forced to breed at unhealthy rates… it’s all about the money. Female dogs in puppy mills are made to have several litters per year, which is extremely dangerous and cruel. Each puppy mill produces pups for pet stores, and pays little attention to the specific health and genetic diseases due to inbreeding. Genetic health testing is almost unheard of and mass-producing pets for profit is the bottom line. In the worst puppy mills, horrifying conditions are the norm. How can you stop puppy mills? There is only one way. Take away their profits.

What about responsible breeders? Well, they do health test the parents and breed for temperament and they will be quite happy to show you the results of genetic test. They know how to socialise and care for pups in their care and will introduce you to the mum. They also commit to lifelong care of their pups. These breeders love their breed but are unfortunately few and far between.

So, why not adopt. We have lots of super pups desperate for a home The adoption fee that you pay to us enables us to care for other dogs in need.

When you adopt you are saying no to back street breeding, no to puppy mills, yes to saving a life and enabling us to save another! 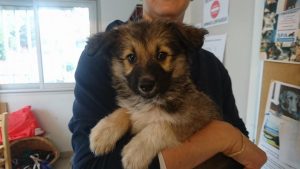 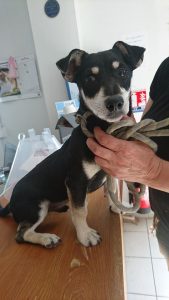