Two sad arrivals and some sad news too. Bad Day!

Well, to “compensate” for yesterday’s two lovely adoptions, we had two arrivals today. Only difference being that instead of two young females in excellent health, we seem to have swapped for two males who are in a terrible condition.

At present there are no photos of the Australian shepherd, as apparently he is in such a poor state that any photos might be distressing. I will see him tomorrow, and already I am dreading it slightly. Have to just grit my teeth and tell myself that at least he is safe now, and that we will make him well again.

The ratier may just be lost, but he has an abscess under his eye that looks very nasty. Plus he is old old old. I hope his owners are looking for him, but only if they are going to get him treatment, otherwise he, too, is better off with us, sad though it may sound.

We received an email today to inform us of the death of Annibal, a magnificent cane corso who was adopted from the SPA in August 2012. He died at his loving home yesterday of cancer. Many thanks to his adopters for the love and care they gave him until the very end.

For those of you (and there are LOTS of you) who have expressed interested in Blues, this photo of Annibal gives you an idea of what an adult cane corso looks like. But as we are explaining to everyone who contacts us, Blues may well turn out to be something other than a cane corso. And whereas a cane corso can be adopted by anyone, if Blues turns out to be something else (and a dog’s breed cannot be determined until the age of eight months), there will be the whole “dangerous dog” permitting to get through. Only serious applicants need apply, as they say! 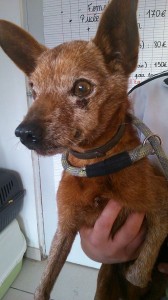 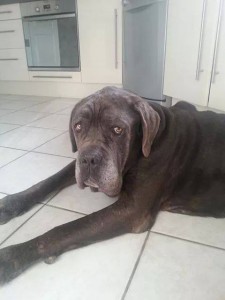 2014-11-14
Darcey Dyson
Previous: Girls’ Day Out!
Next: Two adoptions but four arrivals, including another oldie.