Some of you may have seen Paco’s departure and almost immediate return at the very beginning of the year. Well this quick about turn, so soon after having already been abandoned, did not do poor Paco any good at all and all he does now is cry.

I don’t blame him, I would probably feel the same way.

Adopted some 5 years ago, Paco was brought in for rehoming when his family divorced. He had just settled down to refuge life again (after quite a rough beginning) when he was adopted again, but this time his new home lasted just three days. The woman had been badly advised and took a dog who was far from suitable. It really is better to wait for the right dog than to take any dog because you want a dog NOW! Unless you don’t care anything for an animal’s feelings, that is. And if this is the case, then it is best to not have an animal at all!

So Paco is now an urgent appeal. He would love to have a new home again. A real home, that is. Paco looks like a sharpei with a dachshund’s legs. Although low to the ground, he is a chunky boy, and although he is now coming up to seven years old (he was born in May 2012), he pulls a bit.

He is perfectly housetrained and is fine with other dogs and people of all ages. I am almost certain that he is fine with cats too, and I will find out for sure if you like. 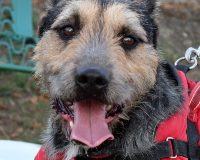 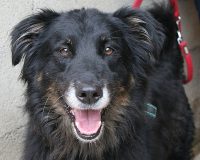