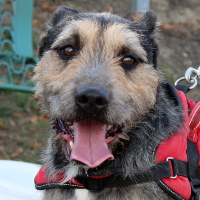 Lucky Mabrouka has been adopted so we have another urgent appeal for you. This time it is for one of the many elderly dogs who are at the refuge and who really would like a home now the weather has got colder.

Gribouille was adopted from the ScPA when he was a very young lad and he has been a wonderful dog all this time. Up until his family brought him back for rehoming at the beginning of September. Gribouille was then eleven and a half years old.

The reason they gave for bringing him back after all these years was that he had attacked and injured a cat who came into his garden. And now the owners were convinced that he would attack their grandchildren. This despite the fact that up till this point he had never shown any aggression at all to humans.

As we so often say, there is no point convincing people to keep a dog they do not want, even when their motivations for rehoming him or her are dodgy to say the least. So the ScPA is looking for a new home for Gribouille, and DRC is trying to help. We do this by publicising Gribouille’s plight, and also agreeing to pay his adoption fee should the adopter come via DRC.

Gribouille is a lovely lad, as anyone who has walked him can confirm. He is in great shape for his age and adores his walks. He does not pull on the lead at all and is a real gentleman. He gets on with some dogs and can walk along side other dogs, but he is not fond of cats (as you will have probably guessed).

Gribouille’s was born in March 2008. He is a rough haired cross breed who weighs about 30kg. He is house trained (it is rare that he does anything in his kennel, and only when he has not been taken out for a walk). He is very friendly and affectionate towards people and still has hope that his life will end somewhere other than a cold kennel.

Please share for Gribouille, we would love him to find a new home. And don’t forget, if the adoption takes place via DRC we will pay the adoption fee!