Sometimes things happen that just help to restore your faith in humankind. Today three puppies were adopted, but tonight’s blog concerns one of these adoptions in particular.

I have told you about our wonderful fostering system, and how these  families help puppies on their way to a better life. Some puppies are already badly traumatised by the time they reach us, and it is heart-breaking to think what these dogs must have been through at so young an age. One such pup is Aby, who arrived at the SPA on July 10th. She was just three months old at the time, but had clearly been beaten and was scared of her own shadow.

Direct action came in the form of Carole, the SPA secretary, who took Aby home to live with her 3 dogs, 4 (I think) cats, husband and two children, one of whom is four years old and the other is a babe in arms. Since then Aby has progressed enormously, as was expected. However the family are just a week away from leaving for a week’s holiday, and were desperate that Aby be homed beforehand, as opposed to coming to the refuge.

An appeal was put out on Facebook this morning, and a family who just happened to be in Carcassonne from their home in Marseille came to meet Aby. They had already adopted a dog from the SPA, and she came along to see what her new pal was like. It was love at first sight, and after a short walk to see how Aby behaved when out of the refuge, off she went!

Sometimes it is just a question of timing, but Aby has been so lucky, finding a family with children and another dog to play with. She trotted off happily, leaving a tearful but happy Carole in her wake.

The other lucky pups were Belle and Idefix, but don’t despair, we have plenty more pups, as well as adult dogs of all shapes and sizes!

Aby with her new mum and dad 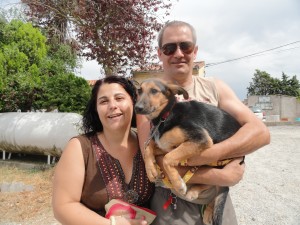 2013-08-03
Darcey Dyson
Previous: Four-dog Friday!
Next: Do you ever need English-speaking vet advice? If so, read on!