Home / Latest News / Visiting some of our dogs who have gone international!

Visiting some of our dogs who have gone international!

Hi Everyone, it is Darcey here again just for a few days before handing back to Moira.

Despite having a wonderful time and more fun than should be legal for someone of my advancing years, and despite my lack of internet access, the dogs have not been far from my mind. This was partly because I was with Sarah, who lives in Belgium, but is a keen SPA Carcassonne volunteer when she comes to spend time in her family’s home in Limoux.

So after the music festival had finished, we went to spend an afternoon in Melle visiting Animal Trust. For those of you who don’t know, this is a tiny private refuge, who last year homed several so-called hopeless cases from Carcassonne (primarily ex- chasse dogs who had either been at the SPA for ages or whom we just knew would not get homed). And in April Sarah delivered a further five Carcassonne dogs, who are now enjoying life much more than they were in the confines of our refuge.

It was lovely seeing them all playing in the parks, running in and out of the ponds and generally loving life. It is a shame that so far none of them have been adopted, but Eline, who runs the refuge, assures me that this is not due to any behavioural problems. Even Venusio and Murphy, who were impossible to mix with other dogs when they were with us, have become well –adjusted, sociable dogs. It is just a matter of time before the right person comes along for them.

Then, the icing on the cake. Before flying home from Charleroi, I phoned to beg a bed from Facebook friends (and fauve de Bretagne fans) who live close to the airport. I had no idea when I called that they were away and that I would be seeing some mutual friends who were house-sitting during their absence! I am sure that Georgie and Jordan would have been just as hospitable, but it was a lovely surprise to see Phil and Anita who have two ex SPA Carcassonne dogs, so I got to see them, and Gwen and Yessa as well.

What a week, happy reunions all round. The news from the SPA was not so good and my dreams of an empty refuge have not come to pass, but we hope for better things to come!

I say hello to Pepere, Jojo and Murphy 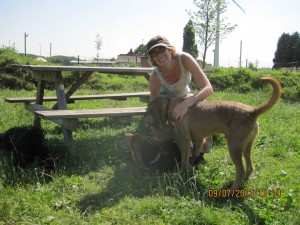 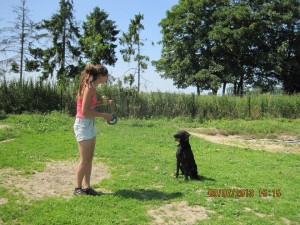 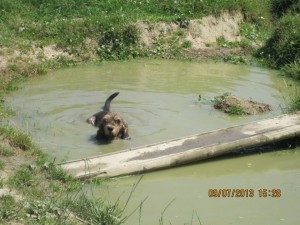 JoJo with Ambre, one of the Animal Trust volunteers 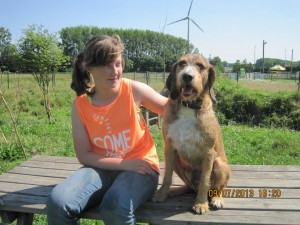 And finally Gwen and Yessa on holiday in Belgium 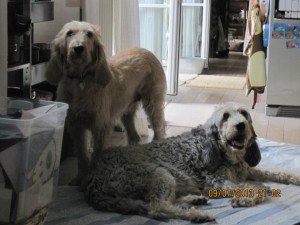