Wokette and Bouboule are adopted!

Today we have good news.  First of all, little Wokette was adopted yesterday at the open day and today another great little dog Bouboule, was adopted.

When Wokette arrived a few weeks ago we knew that she wouldn’t have a long wait. She was a small breed female French Bulldog cross and was very cute! Its great that she has a family as the temperatures in kennels are horrific at the moment and brachycephalic dogs are really at risk.

We hope that today instead of panting and puffing in the refuge she if lying in the cool of her new home. 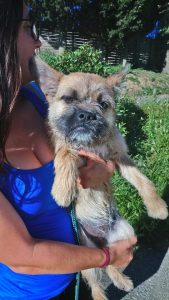 Todays adoption was that of Bouboule, another smashing little dog. Bouboule was 11 years old and also at risk from the heat. He has been very lucky not to have too long a wait and we hope that he too will be enjoying the cool of his new home. 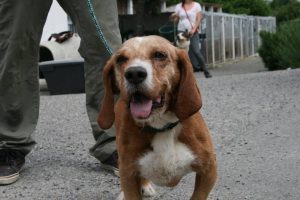 Social media is full of stories of dogs overheating and dying in the heat in both the UK and France. I cant stress too much how dangerous vigorous exercise is for dogs, young and old in this extreme heat.

Please do not take any chances. Exercise your dogs very early mornings or very late at night. Its better that they even miss a walk than die of heat exhaustion.

If you are lucky enough to have a pool which you don’t mind your dog in, it’s a great way to exercise them and keep them cool. Rivers, lakes and even paddling pools are just as good.

It goes without saying that dogs in hot cars are at risk. Unless you have good aircon don’t risk it unless you set off very early or late.

So please keep your doggies inside during the heat of the day to keep them safe and cool.