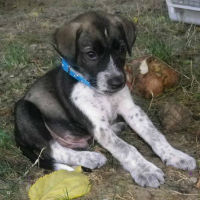 At the end of July a tiny pup arrived at the refuge. He was scared, anxious but most of all, like all very young pups, he was at risk. Although the refuge is a safe haven for lost dogs, when it comes to tiny pups who are not vaccinated it can be a very dangerous place. Sometimes we are able to isolate pups in the infirmary, but a litter of six had arrived the day before, and the cat house was full too.

Luckily, despite the fact that she was already looking after Vixen till her new mum had moved to France, Martine offered Scampi a foster home.  As well as avoiding the risks of infection pups are much better off in foster homes for many reasons: Puppies have a window for socialisation when they need to be exposed to different people, surfaces, sounds, toys and of course other dogs and animals. This is achieved in a much safer way in a good foster home rather than at the refuge. Scampi proved to be a very happy little chap who loved Martine’s dog and cats and was delighted to meet new people.

It’s always difficult as a foster mum to decide when is the best time for a pup to come back to the SPA. On one hand if the pup is at the SPA, the chances of adoption are much higher as potential adopters can see him, but on the other its heart-breaking to leave a dog at the SPA once you have become attached to it. At Carole’s suggestion, Martine intended to do as Carole had done so successfully with Jeena,  that is bring Scampi to the refuge at 14H00 and collect him at 18H00.  This way he could be seen by potential adopters but go ‘home’ in the evening.

As luck would have it this wasn’t necessary as Scampi was reserved on Saturday and adopted on Monday!  He left with his new family who already have a young Labrador so will have a super playmate. Many thanks to Martine, who has already had news, and so knows that Scampi is safe and well in his new home.

In other refuge news, Team Brit was out walking today, as it wasn’t too hot. And I got to meet three of our new dogs. First there is nine year old Anis,a Bichon Maltese, who was abandoned on Saturday for the best reason I have ever heard….wait for it: “We are going on holiday”! At least they were honest, even if it didn’t get them much sympathy!

Then there is Felicie, a tiny four year old shih-tzu/ teckel cross, whose owner has been hospitalised (now there is a proper  excuse). And finally we have Ilda, a tiny basset fauve de Bretagne, whom we have been trying to place directly to another home, in an attempt to avoid the SPA. We failed, sadly, but hopefully it won’t be too long till she is adopted!

Anis – Abandoned because holidays are the most important thing in the world. 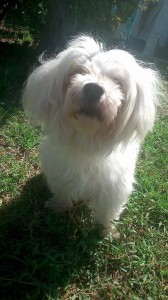 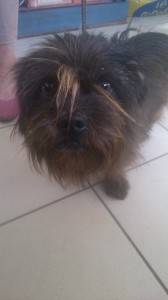 Ilda – Abandoned at one year old 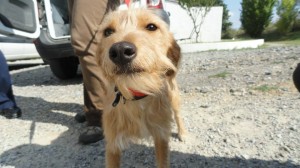