There were no adoptions today, so let’s catch up on what happened yesterday, because yesterday we had one!

Selma arrived as a tiny pup a the end of July, and spent several weeks in the infirmary. Not only did she have mange, but she was also recovering from a pelvic bone fracture. This puppy clearly hadn’t had the best start to life, and I bet she was happy to make it to the safety of the ScPA!

Recovering from these two issues was not the end of this young girl’s potential problems. With very rare exceptions, pups who arrive at the refuge do so without their mums, and ALWAYS without their dads. The vets are usually able to have a good guess at the breed, and in Selma’s case her morphology suggests that she could be a staffie cross. Although this cannot be determined legally until she reaches the age of 8 months, the ScPA had to find a family who was prepared for this eventuality.

No one wants to fall in love with a puppy only to find later on that they have what French law decrees is a dangerous dog. Far better to find a family who is prepared to jump through the hoops that this entails. And luckily for Selma, this is exactly what she has found. She left the ScPA yesterday, and although we are hoping that she is not later identified as being a staffie, we know that her family is prepared for this eventuality. Of course being diagnosed as a dangerous dog won’t change her character at all, but it will mean that she has to be muzzled in public, hence our hope that she is just a normal crossbreed.

Many thanks to her new family for this adoption, and of course we will let you know what happens. 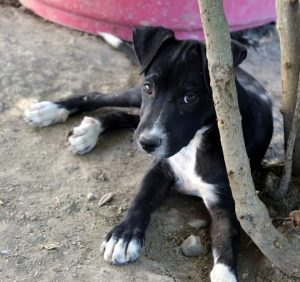 The very hot weather is due to finish tomorrow; it was still in the 30s today, and I am sure everyone, humans and animals alike, will appreciate some cooler temperatures. Hopefully it will bring more visitors and more adoptions!