Believe it or not another five dogs arrived today, and although three of them were reclaimed, I am starting to feel really down. That makes thirty-eight dogs in this year.

Of course things have not been helped by the fact that the central database in Paris is down, so even if a dog is identified, there is no way of tracing its owners. No warning was given for this “maintenance work”, and all we know is that the site will be up and running on Monday. This reinforces my belief that it is a good idea to give your dog a collar with his phone number on it.

I was walking a dog today and I saw several dogs straying in the fields around the refuge. Now anyone who has visited us knows that the refuge has some interesting neighbours, and it is possible that these dogs belong to them. But it is also possible that at least some of them have been thrown out in the hope that they will magically make their way to the refuge. I am posting a photo here of a lovely looking girl who looks to be well looked after. Is anyone looking for her, perhaps?

Otherwise we had one (pre-planned) abandon, a 4 and a half year old Pyrenean Mountain Dog/ border collie cross who is okay with other dogs, children and cats. His owner doesn’t have time to look after him any more. The other arrival was that of a young dog who has an inverted eyelid. He may just be lost, or his owners may have panicked at the thought of paying a vets bill to have this cured. If by chance you are reading this, please come and collect your dog. The treatment costs nothing and this little boy deserves better than to be dumped for such a minor reason. Mind you, if that is the reason he has been dumped, maybe what he deserves is a better owner…..

This lovely looking girl is just hanging around in the fields. Does anyone know her? 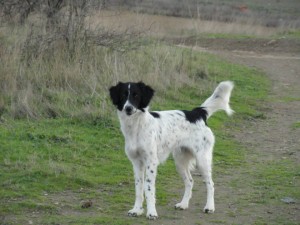 Magnificent Dyson. Okay with other dogs, cats and children. 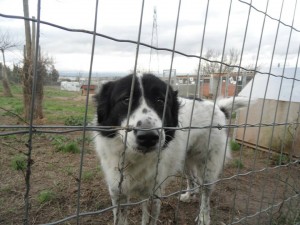 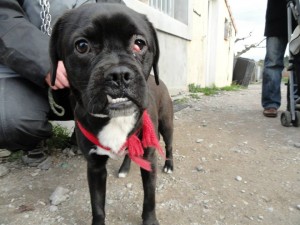